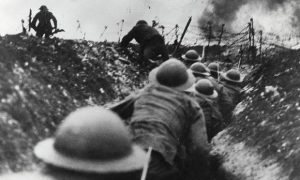 On Saturday 19th November 2016 at Arnold Library commencing at 10:30 Arnold Local History Group will be marking the 100th anniversary of the Great War with a series of talks around WW1 themes from a local perspective as well as displays and discussions with invited speakers in conjunction with their exhibition  ‘Arnold and the Somme’

Scott Knowles of the ‘Great War Society’ will be coming all the way from Lancashire for the whole day, he has a fantastic array of original artefacts from the War that he will be bringing with him and talking about. Scott will be giving a talk in the morning and another again later in the afternoon, but will be around all day to answer any questions. He is especially great with children and will explain all about the amazing amount of artefacts that he has.