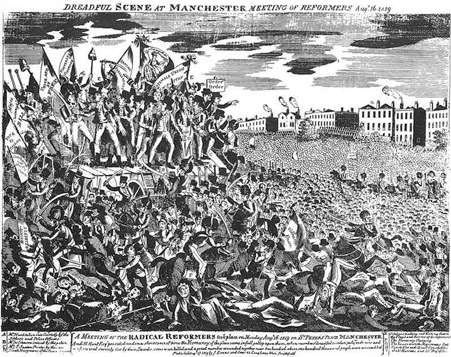 On Wednesday 21 April 2021 at 7.00 pm Nottinghamshire & Derbyshire Labour History Society invite you to a ZOOM Meeting Authority on Trial by Robert Poole.

The months after Peterloo saw a dramatic series of protest meetings followed by several attempted risings in northern England, Scotland, and London’s Cato Street Conspiracy. All this took place against the backdrop of the repressive Six Acts and the trial of Henry Hunt and other Peterloo organizers in York. Robert Poole looks at how close Britain came to rebellion and the place of Nottingham as a reputed hub of conspiracy.

Robert is Professor of History at the university of Central Lancashire, author of the acclaimed book ‘Peterloo: the English Uprising’, and co-author of the graphic novel ‘Peterloo: Witnesses to a Massacre’