The Baddest Motherf**s Who Ever Stepped Foot Inside History 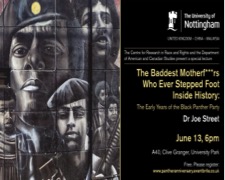 Please join the Centre for Research in Rights and the Department of American and Canadian Studies for this special lecture by Dr. Joe Street to mark the 50th anniversary of the founding of the Black Panther Party:

Founded in 1966, the Black Panther Party operated armed citizens’ patrols to monitor the behavior of police officers and challenge police brutality. It instituted a variety of community social programs, including the Free Breakfast for Children Programs, and community health clinics. FBI Director J. Edgar Hoover called the party “the greatest threat to the internal security of the country”, and Black Panther leader Eldridge Cleaver called Panther founder Huey P. Newton “the baddest motherfucker ever to set foot inside of history.” At the 50th anniversary of the party’s founding, and as a new grassroots movement – Black Lives Matter – challenges police brutality in the 21st century, this lecture will examine the Panthers’ early years.

Dr. Joe Street (Northumbria) researches the African American political struggle of the 1960s and 1970s, including the influence of the African American civil rights movement on racial politics in the UK during the 1960s. He published groundbreaking work on Malcolm X’s impact on racial politics in the West Midlands. His current major research project is a full-length study of the history and legacy of the Black Panther Party. This builds on his past work about the impact of prison and solitary confinement on Huey P. Newton. He sits on the Executive Committee of the British Association for American Studies.

University of Nottingham – Centre for Research in Race and Rights