The Battle of the Somme, Ruddington LHS 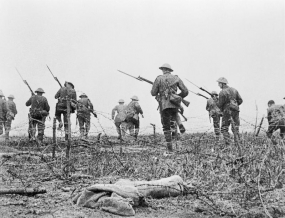 On Wednesday 5th April 2017 at 7:30pm at St. Peter’s Rooms, Ruddington there will be a showing of the film ‘The Battle of the Somme’ a 1916 British documentary and propaganda war film, shot by two official cinematographers, Geoffrey Malins and John McDowell. The film depicts the British Army in the preliminaries and early days of the Battle of the Somme (1 July – 18 November 1916) and. had its première in London on 10 August 1916 and was released generally on 21 August. The film depicts trench warfare, marching infantry, artillery firing on German positions, British troops waiting to attack on 1 July, treatment of wounded British and German soldiers, British and German dead and captured German equipment and positions.

The film was a great success, watched by about 20 million people in Britain in the first six weeks of exhibition and distributed in eighteen other countries.. The Battle of the Somme is significant as an early example of film propaganda, an historical record of the battle and as a popular source of footage illustrating the First World War.

Tickets cost £2.50, including interval refreshments, and are available from Ruddington Village Museum on Thursdays between 10:00am and 12:00 noon or email enquiries@ruddington-museum.org.uk or phone 0115 914 6645 (answer phone)