Boston and the Hanseatic League, Alison Fairman, Friends of the Centre for English Local History 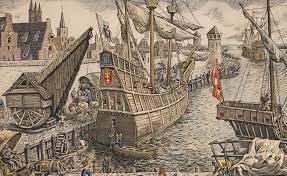 On Thursday 24th June 2021 at 7:00pm on ZOOM Alison Fairman will present the third in the series of Friends of the Centre for English Local History FREE online seminars ‘Boston and the Hanseatic League‘

To join the talk just click on the following Zoom link……

In the thirteenth century Boston was one of the wealthiest towns in England. This fascinating period in Boston’s history saw the town develop close trading ties with Hanseatic towns and cities across Europe. Locally produced wool was the key product exported from Boston which was part of a trading network which dealt in furs, falcons, wine, fish, timber and wax to name just some.

Boston along with London, Hull, Kings Lynn and other East of England ports were not members of the Hanse but provided quarters for their merchants and the all-important counting houses (Steelyards) to facilitate trade. Boston built its wealth and power on the links with ports in France, Norway, Germany, The Netherlands and along the Baltic Sea – connections still important today.

Alison Fairman is the driving force behind the Boston Hanse Group that explores the history of the town, celebrates the shared heritage and maintains close links with the modern Hanseatic towns and cities. It the presentation she will not only uncover some of Boston’s past but will also discuss the importance of the Boston Hanse Group in supporting local history.

frieds of the Cenre for English Local History
Website:
www.englishlocalhistory.org/wp/