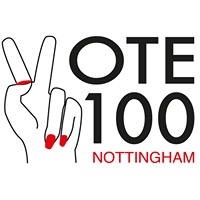 On Wednesday the 7th of February 2018 – 6.30pm to 9 .00pm there will be a meeting at the Nottingham Mechanics Institute 3 North Sherwood Street, Nottingham NG14EZ where Cathy Hunt will tell the story of The National Federation of Women Workers 1906-1921.

Endemic low pay, deductions and fines, intimidation and insecurity -. some of the things women across Britain faced at work in the early 20th century. This talk shows how one union, the all female National Federation of Women Workers, led by Mary Macarthur, sought not just to help but to encourage activism and fight back at local level. Macarthur spent time in Nottingham campaigning on behalf of lace and hosiery workers in sweated trades during this period. This aspect will be reflected in this talk.

There will be a discussion at the end of the meeting on women’s work in the 21 st Century.

This event has been sponsored by Nottingham and Derbyshire Trades Council and will be chaired by their first woman president, Jean Thorpe.

Contact Val Wood for more information on
07500534563 or via e mail on val.wood5@btinternet.com