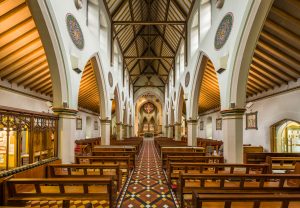 On Saturday 21st September 2019 there will be a heritage open day at St Barnabas-Nottingham Cathedral, which is celebrating its 175th anniversary this year, with tours and family activities,  all connected with A. W. Pugin the English architect, designer, author, theorist, and leading figure in the English Roman Catholic and Gothic revivals who has been called the foremost British architect of the 19th century.

This event is linked with the project by Nottingham Trent University to analyse the original Pugin paintwork in St Barnabas, which evidently still exists:  it was identified at the 1992-3 restoration but it was too expensive to restore.