The Pentrich Revolt 1817: Bravery and Deception, Nottinghamshire and Derbyshire LHS 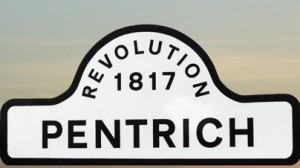 A talk by Julian Atkinson on Saturday 02 April 2016 at The Nottingham Mechanics Institute commencing at 2:00pm (doors open at 1:30)

Julian Atkinson says, “The workers of Pentrich stood up against an oppressive Government to gain democracy and better times. This is their story.”

The Pentrich rising was an armed uprising in 1817 that began around the village of Pentrich in Derbyshire but was quashed soon after it began. Three men were hanged and beheaded at Derby Gaol for their participation in the uprising: Jeremiah Brandreth, Isaac Ludlam and William Turner