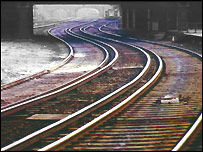 The original Leen Valley line was opened as far as Kirkby-in-Ashfield on 2 October 1848 where it joined with the Mansfield & Pinxton Railway and services from Mansfield to Nottingham. The line was owned by the London, Midland and Scottish Railway (LMS) from 1923-1947 and in 1948 became part of the nationalised British Railways (BR).  The final closure of all of the stations on the line  in October 1964 left Mansfield without a rail link. The line between Nottingham and Newstead re-opened in 1993 and to Mansfield Woodhouse on 20th November 1995 with the final extension to Worksop opening in 1998.

You can pre-register in person at the Local Studies Library, phone 0115 9152870, or by email to: Local_studies.library@nottinghamcity.gov.uk