William Booth is best-known as the founder and first General of The Salvation Army, and as the author the best-selling book, In Darkest England and the Way Out, in which he outlined his programme of social reform for the ‘submerged tenth’, the poorest section of the community, published in 1890, the year in which his beloved wife Catherine died. How did this boy, born in the Nottingham suburb of Sneinton in 1829, become a celebrity on the world stage by 1912, when he died at the age of 83? We trace his life from his home and family in Sneinton, his conversion at the Wesley Chapel in Nottingham, his apprenticeship and employment as a pawnbroker’s assistant in N 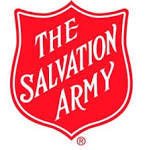 ottingham and London, his early Christian ministry in Lincolnshire, his service as a minister in the Methodist New Connexion, and his move to London in 1865, after several years as an independent evangelist. We follow him through the formative years of his Christian Mission in East London, and its subsequent development into The Salvation Army, with an ever-widening circle of influence, as the movement spread around the world. We review his life and work, and also how The Salvation Army has celebrated his life and kept alive his memory in the century since he died, and we also consider why Salvationists today are still drawing upon his legacy, a hundred years after he ‘laid down his sword’.

Gordon Taylor is a lifetime Salvationist, with family roots going back to the early years of the movement when his great-grandparents became officers. He worked as archivist and historian at The Salvation Army International Heritage Centre, London, for more than 20 years until his retirement in 2011 and has completed a two-volume biography, William Booth: His Life and Legacy, to be published in October 2015.

Please note that places for this talk are limited. To reserve a place, please e-mail the Museum: wbbm@salvationarmy.org.uk or book online at: http://lunchtime-talk-william-booth.eventbrite.co.uk or call the Museum on 0115 979 3464.