1:00pm on Sunday 26th September 2021 from the south end of Queen’s Walk by the Embankment tram stop

In the 18th century Nottingham was a fashionable, elegant town. In 1724 Daniel Defoe described it as ‘one of the most pleasant and beautiful towns in England’. In 1772 Robert Sanders said of Nottingham, ‘the situation is not exceeded by any in England with many fine houses, the streets are broad and well paved, many gentlemen of great fortune reside there’. In 1782 a German traveller, Karl Moritz, found Nottingham to be ‘of all the towns I have seen outside London the loveliest and neatest’. However, due to a combination of urbanisation, movement of people off the land, industrialisation, and population growth, the number of people in the town increased from 10,910 in 1750 to 28,861 in 1800 and by 1831 it had reached 50,220. The upper classes moved out of the town centre which became increasingly populated by the working class. All the available space within the town boundaries was intensively developed with ‘in-fill’ building which resulted in the creation of cheap, poorly designed, overcrowded housing, mostly in the form of common lodging houses. Housing conditions were poor, sanitation was an increasing problem and in 1845 J.R. Martin’s, ‘Report on the Sanatory Condition of Nottingham, Coventry, Leicester, Derby, Norwich, and Portsmouth’ described the situation of Nottingham as ‘so very bad as hardly to be surpassed in misery by anything to be found within the entire range of our manufacturing cities’.

Historically the town boundaries were surrounded by open ‘Common Land’ to the north-west (the Sand Field), the north-east (the Clay Field) and the south, between the Rivers Leen and Trent (the Meadows). The obvious solution was to develop this open land through the process of Enclosure, but the Town Corporation was persistently against it. The Corporation closely guarded the established rights and privileges of the freemen, of whom they themselves formed the inner circle. The issue was essentially that certain lands surrounding the built-up area of the town were subject at various times during the year to pasture rights by the freemen, and also that parts of the lands owned by the Corporation were let to freemen at a nominal figure. Enclosure would abolish both privileges, and the Corporation, backed by the freemen, would not even discuss the matter. The consequence was that as long as the freemen had rights over these lands they could not be developed as building sites or for anything else that would destroy grazing rights. The result was a deadlock, with most regrettable consequences, and so it remained until the implementation of the Municipal Reform Act of 1835 which changed the way that councils were elected.

On June 30th 1845, an Act to enclose the Fields and Wastes of Nottingham, St. Mary’s Parish, was given the Royal Assent. The Act would allow the town to build out over the fields in all directions, but it was not actually implemented until 1865, which must suggest the number and complexity of the different issues involved.

One result of this process was the allocation of 130 acres of land for the use of the public for recreation. The open fields around Nottingham had given the townspeople space for walks and games in the fresh air, and now it was seen to be necessary to keep something of this facility in spite of the building that was about to take place. The plan was to create a circle of walks around the town, linked to local parks and including a few cricket grounds. This was subsequently amended to include an arboretum but to reduce the extent of the walks. Some land was also to be used to expand the General Cemetery and the Rock Cemetery.

When The Friends of the Forest was set up in 2001 there was little appreciation of how important the 1845 Act had been in maintaining open space as a source of fresh air and recreation for the people of Nottingham. However. but The Friends set about establishing an itinerary and created a free public event to show and explain this land, its heritage, and its purpose. For the past 17 years June Perry and The Friends of the Forest have been conducting an annual guided walk which takes in Queens Walk, Queens Walk Recreation Ground, Victoria Park, Robin Hood Chase, Corporation Oaks, St. Ann’s Hill (round Belle Vue Reservoir), Elm Avenue, The Arboretum, Waterloo Promenade, and The Forest. The walk also includes parts of the General and the Rock Cemeteries, both of which provide the pleasures of a park with their winding paths over hilly landscapes, richly populated with trees and fascinating monuments. This year the walk has been made into a Town Trail marked with information boards to help follow the 5-mile route and Kate Ashbrook, General Secretary of the Open Spaces Society, will formally open The Trail and start the walk at 1:00pm on Sunday 26th September from the south end of Queen’s Walk by the Embankment tram stop.

The walk takes a leisurely pace and includes brief historical chats along the way. It is suitable for powered wheelchairs. It finishes at the Inclosure Oak at the Lodge end of The Forest.

Please join us in supporting the Inclosure Walk and Nottingham’s green spaces. 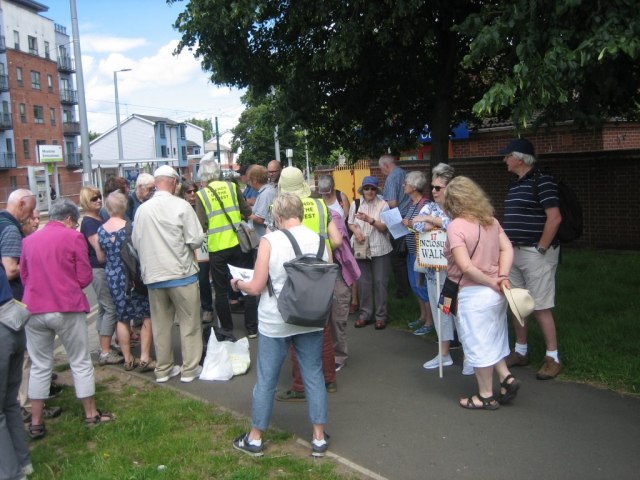 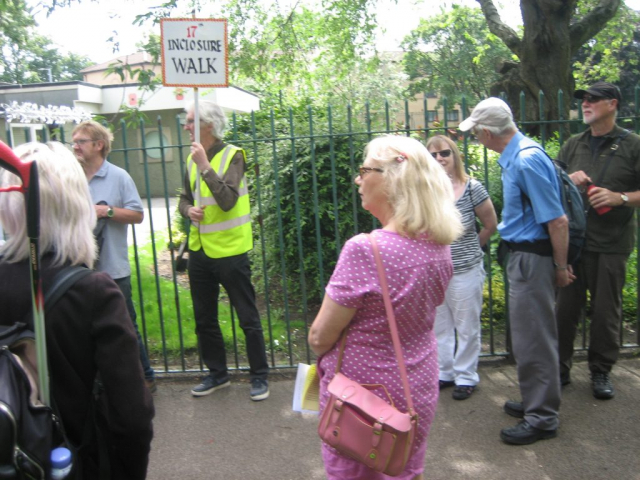 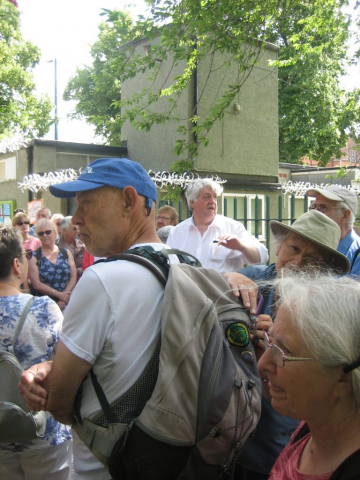 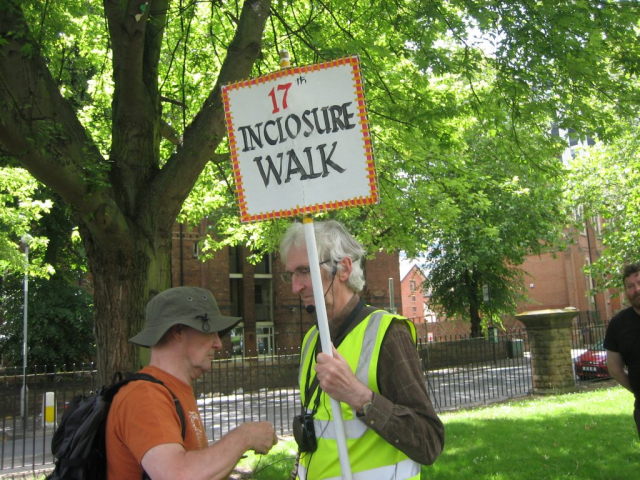 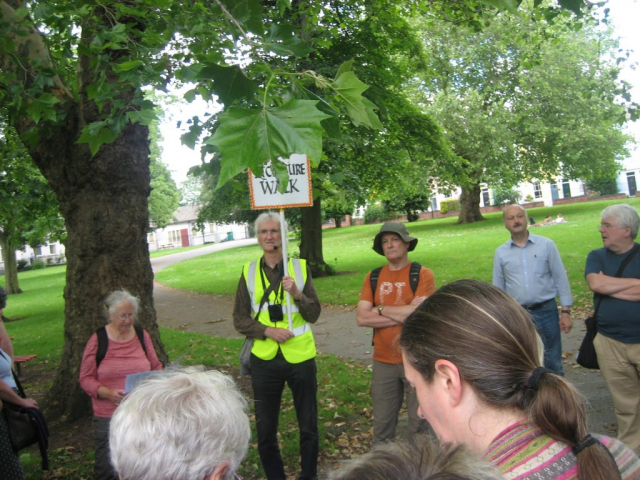 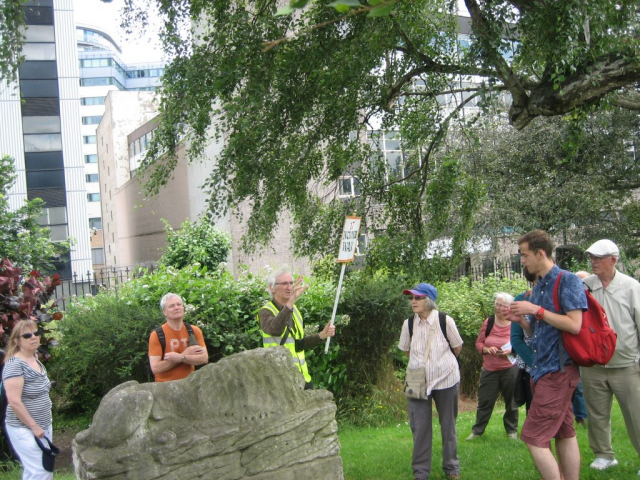 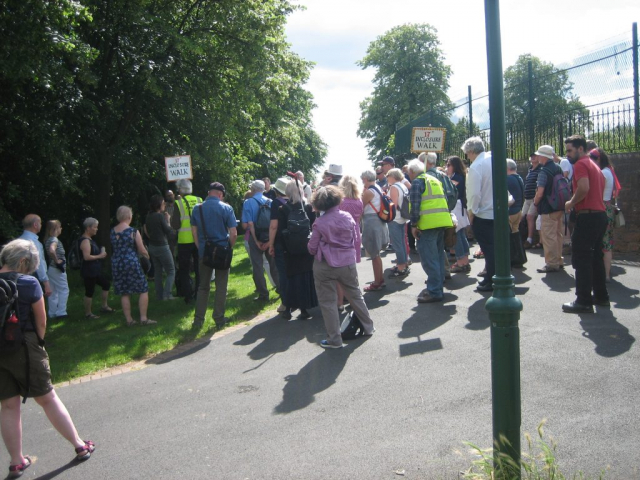