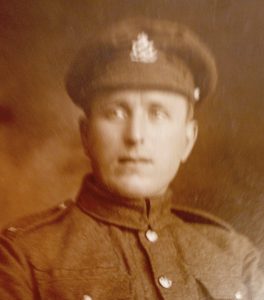 On Tuesday 9th May, 2017 commencing at 10:00 in the Local studies Library, 1st Floor, Central Library Nottingham Chris Weir, will give a talk on the letters (1916-18) of Nottingham soldier, Harold Priestley.

This event is FREE. You can pre-register by phoning the Local Studies Library on 0115 9152870 or by email to Local_studies.library@nottinghamcity.gov.uk

A Community Project based on the World War 1 letters of Nottingham soldier, Harold Priestley has been successful in its bid for a Heritage Lottery Fund grant.  £17,500 has been awarded to The Vine Community Centre,  Bobbers Mill Road in Hyson Green in association with St Stephen’s Church and IntoUniversity.  The Project  will vividly recall the life of local soldier Harold Priestley, who fought on The Western Front, and his family and the community during  the period 1914-18.  Support for the Project came from various directions including the Nottinghamshire Local History Association.

The project will conserve and digitize 88 letters plus postcards and photographs in the possession of David Priestley, Harold’s grandson. The digitized collection will be form a legacy that can be accessed locally or through web links.

The title of the project ‘Present Location Uncertain’ is taken from the words stamped on letters returned to Eva, Harold’s wife, from the Western Front  in 1918, when Harold could not be found after fighting on the Front line.  He had fallen in battle near Arras in March 1918.

The moving account of Harold and the family’s struggles during WW1 will be turned into a community theatre production by Sarah Stephenson. The Project will engage volunteers and researchers in discovering how war affects the lives of both the soldiers fighting abroad but also their wives, children and friends….and their  local community.  There will be drama and historical workshops that will offer  creative opportunities to get involved. The Project will be filmed  by Richard Swainson Productions.

In a letter written on the 7th September 1917 Harold writes that he has sent Eva ‘a little Silk Handkerchief’ and a brooch, ‘a relic of the war so it is a little souvenir for you’.

The Project continues to the end of the year, with the community theatre performance at St Stephens Church, Hyson Green  at a date to be announced in July.