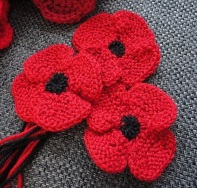 Whether you knit one or one hundred poppies, you will be commemorating those who lost their lives in the WW1.

Look at [BBC RADIO NOTTINGHAM] for patterns and further details.  You can also find lots of free poppy patterns online.

The poppies will be donated to the Poppy Appeal and the deadline is 22nd October 2014.

Thank you for being part of this project.