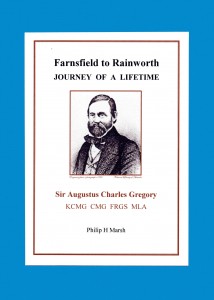 Farnsfield to Rainworth: Journey of a Lifetime.

Is the story of Sir Augustus Charles Gregory (1819-1905), explorer and surveyor-general. He was born on 1 August 1819 at Farnsfield, Nottinghamshire, England, the second of five sons of Joshua Gregory and his wife Frances, née Churchman. His father had seen service and been wounded and in lieu of a pension accepted a land grant in the new Australian settlement of Swan River where the family arrived in 1829.

Aided by a neighbour, Surveyor-General John Roe, Augustus became a cadet in his department in 1841 and was soon promoted an assistant surveyor. He worked mainly in the country, marking out roads and town sites and issuing pastoral licences, often with his brothers as his chainmen. He also designed an apparatus to operate the first revolving light installed on Rottnest Island.

Gregory’s resource, bushcraft, facility for invention and technical expertise won him the confidence of his superiors and in 1846 he was given command of his first expedition. In seven weeks with his brothers Francis and Henry Churchman (1823-1869) he travelled north of Perth, and returned in December to report good grazing land and a promising coal seam on the Irwin River. Impressed by his enterprise a group of colonists invited him in 1848 to lead a settlers’ expedition to map the Gascoigne River and seek more pastoral land. Although repelled by dense scrub the party charted part of the Murchison River and found traces of lead which led to the opening of the Champion Bay district centred on Geraldton.

Gregory continued to mark out roads and stockroutes and look for grazing land and minerals until 1854 when Governor Charles Fitzgerald reported to the Colonial Office in glowing terms of his skill and ability to abide by instructions. The imperial government had already decided to sponsor a scientific exploration across the north of Australia and Gregory was chosen to lead it. With eighteen men, including his brother Henry, Ferdinand von Mueller and other scientists he sailed from Moreton Bay in August 1855 and in September reached the estuary of the Victoria River. After initial set-backs Gregory led several forays up the Victoria River and traced Sturt’s Creek for 300 miles (483 km) until it disappeared in desert. Turning east the party explored the Elsey, Roper and Macarthur Rivers, crossed and named the Leichhardt and then travelled to Brisbane by way of the Flinders, Burdekin, Fitzroy and Burnett Rivers. In sixteen months the expedition had journeyed over 2000 miles (3219 km) by sea and 5000 (8047 km) by land. The natural resources discovered did not measure up to expectations, but Gregory was awarded the gold medal of the Royal Geographical Society and his report later stimulated much pastoral settlement.

Although Gregory attributed his success to ‘the protection of that Providence without which we are powerless’, the smooth passage and thorough scientific investigations of the expedition owed much to his leadership. Paradoxically it was too successful to be recognized as one of the most significant journeys led by one of the few unquestionably great Australian explorers. Modest, unromantic and resolute in following instructions, he did not dramatize his report, boasted no triumphs and sought no honours despite his admirable Aboriginal policy and meticulous organization. He excelled as a surveyor and manager of men, horses and equipment, and invented improvements for pack-saddles and pocket compasses. His seasonal knowledge and bushcraft were unparalleled and he was the first to note the sequence of weather patterns in Australia from west to east.

Gregory’s qualities were again displayed in 1858 when he led an expedition for the New South Wales government in search of Ludwig Leichhardt. From Juandah station he went west, crossed the Warrego and Barcoo Rivers but after finding traces of the lost explorer was forced by drought to abandon the search and travel south to Adelaide. This was his last major expedition. He marked the southern boundary of the new colony of Queensland and in 1859 became its first commissioner for crown lands and surveyor-general. He relinquished lands in 1863, on 12 March 1875 was replaced as surveyor-general by William Tully, and became geological surveyor.

Gregory had the most onerous duties in the new government for land was the colony’s greatest resource. He was responsible for classifying and controlling an area of 670,000 square miles (1,700,000 km²) inhabited by only 12,000 people with differing concepts of land alienation and use. Widely divergent physical and climatic conditions, haphazard records and a staff lacking in both quality and quantity, made his task unenviable and later unpopular. Although he worked with speed and efficiency, his ‘qualities as an explorer were not matched by his ability to institute and oversee a large, complicated and important Government department’. He had little patience for administrative process but relied on a combination of practical experience, technical skill and a network of intimates which included squatters, bushmen, explorers and surveyors. His social and political ties with the ‘Pure Merinos’ coloured his judgment and influenced his administration of land law. The most powerful civil servant in Queensland, he rarely hesitated to translate his own inflexible views into administrative action. His memorandum of 17 August 1867, which gave much of the best land on the Darling Downs to the pastoralists, was Queensland’s greatest concession to the squatters since the 1847 Order in Council. Although personally incorruptible, Gregory had little interest in smallholding and in 1868 his statement to the Legislative Council openly revealed that he had no confidence in the main principles of agricultural selection and in the ideological and social assumptions that lay behind it. He must be held culpable for condoning abuses of which he had ample proof, and much legal trouble ensued later from his deliberate laxity, secrecy and determination to remain dictator of his department. Yet justification can be pleaded. Not only did he have to translate the complex and often contradictory proposals of raw, factious politicians into reality but he also had to cope with continuous pastoral expansion. That he neglected the interests of the smallholder is true but equally valid is the record of his great services to a new colony struggling with immense problems.

Gregory was appointed to the Legislative Council on 10 November 1882. Always a critic of the government, he opposed all radical legislation and social reform and allied himself with the most reactionary squatting group in the House. He spoke more often than most members and his advice was freely sought and given, particularly on land and technical matters. He joined the Freemasons in 1855 and was grand superintendent of the Royal Arch Lodge in 1891. In 1863-1905 he was district grand master of Queensland lodges operating under the English Constitution. He was also a staunch Anglican and won repute for his private charity. He maintained his scientific interests and associations. A trustee of the Queensland Museum in 1876-99 and member of the Aborigines commission in 1876-83, he was elected president of the Australasian Association for the Advancement of Science in 1895. In local government at Toowong he served as president of the divisional board and in 1902 became first mayor. For his public services he was made C.M.G. in 1874 and K.C.M.G. in 1903 for his contribution to Australian exploration. He died unmarried at Rainworth, his Brisbane home, on 25 June 1905 and was buried in Toowong cemetery.

In Brisbane Gregory published five geological reports on southern Queensland and such significant pamphlets in 1878 as The Real Property Act of 1877, Meridian Line and Laying out Lines of Latitude on the Ground and the Supply of Water to the City of Brisbane. His report to the British government, ‘Papers Relating to an Expedition Undertaken for the Purpose of Exploring the Northern Portion of Australia’ was printed by the House of Commons in 1857, and his collected papers and records and those of his brother Francis were published in 1884 by the Queensland government as Journals of Australian Explorations; this laconic chronicle seldom does justice to his many qualities and achievements.

For these explorations he was awarded the founder’s medal of the Royal Geographical Society in 1863. His report became a handbook for northern settlement by pastoralists and pearlers. He also collected many botanical and geological specimens which were later housed in Charles Nicolay’s museum at Fremantle. He moved to Queensland in 1862 where in 1864 he married Marion Scott, daughter of Alexander Hume; they had five sons and one daughter. Gregory was appointed commissioner of crown lands in the Toowoomba district and to the Legislative Council in 1874. He was postmaster-general in 1883 and led the opponents to payment of council members in 1886. He died at Brisbane on 23 October 1888.