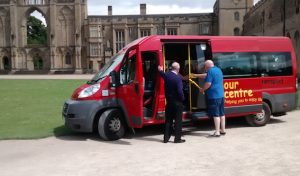 For the past ten years Sheila and Ken Robinson have been organising and managing an annual programme of mini-bus tours for the Hucknall Tourism & Regeneration Group (HT&RG), which was founded in 2002. For 2017 they have arranged no less than seven different tours on twenty dates.

Laura Simpson, Nottinghamshire County Council’s Senior Practitioner in Heritage Tourism had the brilliant idea of asking Sheila and Ken to run a training day, ‘How to run a heritage bus tour on a budget’, which took place on 16 June 2017. A group of some twelve interested individuals, at least four of whom found their way to the day via the NLHA Newsletter (myself included). Two attendees came from Derby, such was the interest. None of us left disappointed. 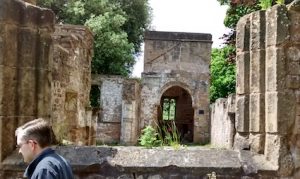 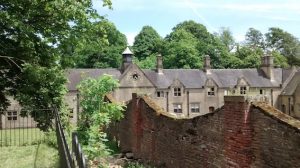 The morning was spent in the Dynamo House at Bestwood Country Park, where Laura did a presentation on Heritage Tourism in Nottinghamshire, which included information about the national scene as well. The county focus is on a collection of ‘themes’, including ‘Blood, Sweat and Tears’ (industrial history), ‘Rebellion and Freedom’ (dissent and liberty), ‘With Brush and Pen’ (literary and artistic heritage) and ‘Our Sporting Life’ (sporting heritage).

The recession has resulted in the way we take breaks and holidays changing. More of us now stay with friends and family than in hotels or self-catering, and from the nodding heads I guessed it was a fact most of those present could relate to. Another one of the many interesting points made by Laura which caught my attention was a reference to ‘visitors’ (not ‘tourists’) who ‘come in pursuit of the real’. These are people who want to visit local pubs, sporting events, maybe ride on a bus.

There was much in Laura’s presentation to hold the attention of local historians with an interest in reaching a wider audience, and as Sheila and Ken demonstrated with their presentation, you don’t have to have a museum or historic building. Organising walks is an obvious activity, but with the help of a mini-bus you can do much more. Sheila took us  through all the things you have to think about and plan for: funding (including sponsorship); costs (including insurance); routes (including duration); advertising ; Booking methods and the day of the tour itself — of which we had a perfect example after a sandwich lunch, when Sheila and Ken took us a Byron inspired tour from Bestwood to Annesley, Newstead Abbey, Hucknall, before returning to Bestwood, where we ended the day with a general discussion and muffins!

I went home mightily impressed by the enterprise of Sheila and Ken and thinking about the opportunities that exist for local historians everywhere to follow their example. I should point out that HT&RG does not duplicate existing bus routes or compete with them in any way. They fill up their 14 seat mini-buses quickly and they offered many tips on how to raise money from local businesses, especially people selling bathrooms and kitchens!

Among the pieces of paper we left with was a County Council Risk Assessment Record prepared for the training day. A useful document some might too easily dismiss as unnecessary. I found it quite the reverse. Laura’s enthusiasm also helped the day go well, as she made her way around the group talking to participants about their interests and reasons for attending.

I can see this training being organised again and when it is, book a place. You won’t be disappointed.