Call to the surviving families of GCR casualties of WW1

An original 1888 fully-restored original GCR carriage, in a special Commemoration ceremony on Sunday 17th September 2017, is to be dedicated at Ruddington Heritage Centre, to the hundreds of employees who left the Great Central Railway to join the conflict in the Great War (1914-1918) but failed to return home.

“The carriage is again becoming a moving Memorial to the fallen in that devastating war of attrition that affected so deeply almost every family is the land,” says Roger Penson, Executive Trustee of the owning organisation, the GCR Rolling Stock Trust.

The event is to be honoured by The Deputy Lord Lieutenant Col. Roger Merryweather DL and Lt Col. Darren Woods RE, Commanding Officer of the East Midlands Army Reserve Centre; as well as leading County citizens. 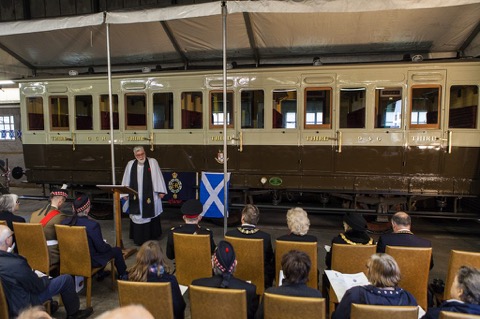 “We are hoping that as many families as possible descended from those who died, failed to come home or were severely injured will come to the Heritage Centre to join this very special tribute”.

Please be sure to tell us you will be there – and be present from 2 o’clock when the RH Cadet Corps of Drums and Bugles leads the Parade salute.  To register your interest in this event, please email: gcrrollingstocktrust@live.co.uk

“It is to be a GCR-themed Come-and-See event on Sunday 17 September, especially for Members of the Great Central Railway Society and as many GCR enthusiast friends as possible.” announces Roger Penson, Executive Trustee of GCR Rolling Stock Trust.

“All GCR enthusiasts are welcome – but the first 50 GCRS members on site will not only be able to inspect the GCR Rolling Stock Trust’s work on its fleet of original GCR carriages but also have a free ticket to ride over the GCRN tracks from Ruddington Fields to Loughborough (Brush Works) and back.  There’s incentive!”

In pride of place at the Heritage Centre at Ruddington will be the newly restored and gleaming MS&LR 6-wheel carriage on display and in the open for the first time. This vehicle has been dedicated to those 225 troops of The Royal Scots Regiment who perished in a similar type of carriage in the worst-ever rail disaster in 1915 at Quintinshill.

Now for the treat……For a modest donation there will be a draw for the first 20 seats being offered for the first VIP public outing in the Spring, to be launched on GCR London Extension metals. “Also on view we will have numerous displays on the former Great Central Railway theme and this will be taken up by the offering of visits to the GCR stock of Barnums, the chosen Suburban carriage being converted to a vital stores van, especially the Barnum no 228 which is already part restored and heavily researched.  Progress on the new GCR Museum build at Leicester North we hope will be revealed.”

Expected on site will be GCR locomotives and stock in the numerous gauges – run by the NSMEE and the Model Railway Club – and an update on the progress of the MS&LR 4-4-0 tender locomotive being recreated by the 567 Locomotive Group.  Gates open at 10.00 hours. Roger says: “Please come and enjoy the day with us.”

Here are the details of the GCR Nottingham programme – thanks to the invaluable support of GCRN, our hosts:

12.00 – Welcome to RST members and GCRS and Light buffet in Marquee on Station Concourse.  And special brew real ale