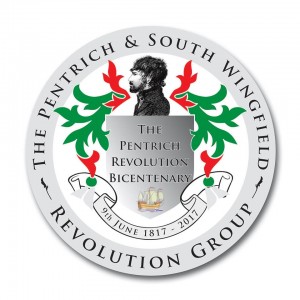 Hello everyone
I am currently working with the Pentrich Revolution Bi-Centenary Group towards putting a funding bid together to run various commemoration activities during 2017, the bi-centenary year of the uprising. The 1817 Pentrich Revolution or Uprising is often referred to as England’s last revolution. Regarding the funding bid, and under the banner of “need and demand”, we need evidence that people are interested in commemorating the bi-centenary of the event in addition to taking part in the various activities. To that end, any comments in favour of the commemoration would help towards a successful bid. Any comments can made by email to:

On 9th June 1817 over 300 men set out from villages on the Derbyshire-Nottinghamshire border to march to Nottingham. They thought that they were part of a general rising across the North and Midlands to bring down an unjust and oppressive government. They were motivated by poverty and the hunger of their families, and with all efforts to gain a hearing suppressed they saw armed revolt as the only alternative.

Unkown to them the Government was fully aware of their plans, and their agents had actively encouraged the rising. Rebel leaders in other areas had already been arrested. The Derbyshire men were to be used as an example to others. After a trial in Derby, with a carefully selected jury, three were executed , hanged and then beheaded, fourteen transported and others imprisoned. Their families were evicted and homes destroyed.

There was a national scandal at the time due to the role of the government agents provocateur, but the events were soon largely forgotten. Yet they are a significant step in the long story of the fight for universal suffrage and a just society.

The significance for Nottinghamshire.

The Pentrich and South Wingfield Revolution Bicentenary Group has been set up to commemorate these events. Supported already by Derbyshire County Council, local councils along the route in Derbyshire and Nottinghamshire, Derby University and many local organisations, with the active participation of descendants in England, Australia and the U.S.A.. A range of events are planned through 2017. These will include:

A day festival at Wingfield Manor on 10th June 2017 , supported by English Heritage.
A festival of walks , including 13 guided walks to tell the story of the uprising and its participants, both along the route of the march and in Nottingham, Derby, Sutton in Ashfield and in Australia. A re-enactment of the full march will also take place in June.
Orientation Boards are to be placed along the route of the march.
An exhibition is being organised by Derby Museum, and , if possible, to come to Nottingham Castle Museum and the Galleries of Justice. Exhibitions will also be held in local communities along the route. It is hoped that a permanent exhibition will remain at one of these centres.
Derby University is organising an international conference on “Radicalism 1790 – 1820” on 8th and 9th June 2017. A student conference will also be taking place.
Local research into the events and into family heritage is already taking place , involving many local groups, and publication of results is being supported. The story is being told through a variety of ways, incluing art, music and drama. An exhibition of work , inspired by the rising, by local artists is already underway. A choirs workshop is planned for Saturday 15th October led by singer and song writer Lester Simpson.
What you can do.

1. Include the bi-centenary of the Pentrich events in your programme for 2017 and help to publicise the planned events.
2. Research into the events in your community or consider any possible involvement of your family.
3. Participate in the events organised throughout 2017 to commemorate the Pentrich Revolution and its legacy.
4.The Bicentenary Committee are happy to provide speakers to come to your organisation to talk about the Pentich Revolution and the bicentenary.