A thousand years of history lie beneath Rufford Abbey Country Park from Monastic ruins to one of the most curious grand houses in the county. Nottinghamshire County Council Community Archaeologists returned to Rufford this year for the third season of a series of excavations to investigate the extent and condition of buried remains around the park. 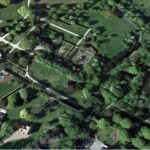 This year the investigations focused on the area to the south east of the main monastic complex around an ornamental ruin at the end of the Orangery garden (fig. 1). This romantic ruin was designed as a water cascade, carrying water from the Orangery canal down into the Japanese garden of the post-medieval grand house. But archaeologists at the Council have long suspected that this feature might conceal something older and more intriguing; the remains of a medieval mill built by the monks of Rufford to serve their estate.

The Cistercian monks were great architects of the landscape, and were known to have embarked on large scale projects involving water management. At Rievaulx in North Yorkshire, the Mother Abbey to Rufford, the monks altered the course of the river to provide power to mills. The monks who founded Rufford were no less ambitious and old water channels and great dams can still be seen in the landscape. The remains of two medieval mills have already been discovered in the area of the Country Park, and it is thought that there may well be others. 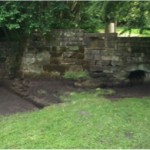 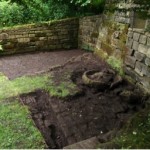 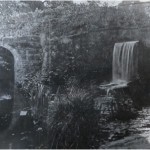 The stone walls of the romantic ruin clearly have different phases. The walls have been altered and rebuilt, not just when the grand country house was lived in, but also more recently in the 1980s. There is one area in particular that stood out as being of genuine medieval origin (figs. 2 and 3). There is a water channel running through the structure which is now infilled and overgrown. An old black and white photo of the garden shows water in the channel and a small cascade coming from the ornamental canal a short distance away. The cascade fell onto a circular carved stone, still in situ today, which dispersed the water in an attractive way. The photograph also shows a variety of plants and a walkway at the top of the wall (fig. 4). The walkway has since disappeared and the archway blocked up. The whole area has become covered by grass and vegetation although the water channel can still be seen as a depression in the ground.

To investigate the remains, NCC Community Archaeologists ran a two week excavation from 29th June to 10th July which was carried out by a total of 26 volunteers and students. A field school took place in the second week to train beginners in archaeological techniques. 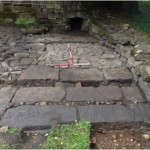 Initially the extant stone walls were cleaned back and fully uncovered. A stone floor layer was found only a few centimetres beneath the turf in the main trench which was part of the post-medieval garden. It was not possible to remove this and investigate underneath and stone surfaces will now be left exposed for visitors to see (fig. 5). 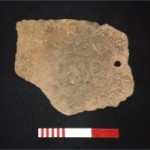 A short distance from this surface, a course of a substantial wall of possible medieval date was uncovered and a large medieval roof tile lay discarded nearby (fig. 6.). These attest to a medieval building on the site of unknown function.

A large amount of demolition rubble of post-medieval date was found in other areas of the trench so a later brick structure must have stood in the vicinity.

A small test pit was dug on raised ground behind the portion of the large standing wall where the archway used to be. This came down on to a post-medieval brick tunnel which is now blocked up and buried. This has helped to provide further information on water flow and management for the 18th and 19th century gardens. One glazed medieval tile came from this pit which had clearly been redeposited. It was not possible to dig through the depth of soil to clear the modern made up ground and look for medieval remains below. The tile does provide further evidence that at least one medieval building used to stand in this area and has left a few clues as to its existence, if not its purpose. 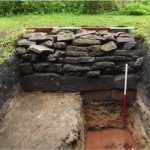 Trench 2 was a 2m wide section across the water channel. The tops of stones were visible either side of the channel underneath vegetation. These were uncovered and as the channel was cleared, the stones were found still lining both sides to a depth of around 1.5m. A thick layer of modern coal silt covered the top of the channel with clean sand below. Evidently the channel had been cleaned out at some point in the past and filled back in with sand and gravel. The lowest courses of stone were of substantial size and are possibly medieval, which would mean that this channel was in use in the medieval period (fig. 7). The upper courses were a later addition and had re-used some pieces of shaped building stones. No medieval finds came out of this trench due to the thorough cleaning out and infilling for the later garden.

The site has clearly been remodelled over many centuries which has obscured a lot of the finer details of the full sequence of events. Medieval and post-medieval remains are in some places jumbled together. The medieval standing remains could have formed part of a retaining wall close to a medieval building of unknown function, which still leaves the possibility that there could be a mill somewhere along the water channel. After the medieval building was levelled, the site was used in the ornamental gardens of the country house and remains have been incorporated into the romantic ruin that can still be seen today.

NCC Community Archaeologists would like to thank Rufford Abbey Country Park for funding this excavation as part of their summer events programme and all volunteers who came along to take part.