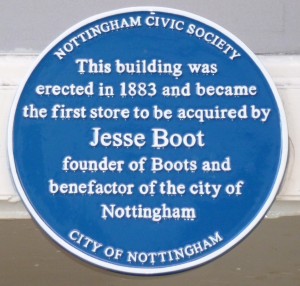 On the 17th November 2015 a Blue Plaque in honour of Jesse Boot was unveiled at the entrance to his first shop on Goose Gate, Nottingham, by his great granddaughter Emma Houston. The Plaque was erected by the Nottingham Civic Society in association with the Boots Company. As well as founding the company, Jesse Boot contributed to many local charities and causes and gave land and donations for the founding of the new University of Nottingham site at Highfields.