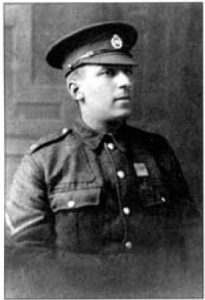 Walter Richard Parker was born on 20 September 1881 at 5, Agnes Street, Grantham. He spent his early years in London moving to Stapleford to begin work at Stanton Ironworks as a coremaker in about 1899. Walter was married to Olive, the daughter of Mr Joseph Orchard, who for many years had been the station master at Stapleford.

Walter enlisted on the 7th September 1914 in the Royal Marine Light Infantry and was attached to the Portsmouth Division. After initial training the Division set sail in February 1915 for the Dardanelles,landing on the Gallipoli Peninsula on the 25 April 1915. Five days later on the 30 April he won his V.C. Walter volunteered to take water and ammunition to about 40 men in an isolated trench. To reach the trench he had to negotiate 400 yards of open ground, dubbed the Valley of Death which was raked by heavy Turkish machine gun fire. He managed to reach the trench sustaining two wounds in the process. For the next 24 hours, according to official reports, he tended the wounded “displaying extreme courage and remaining cool and collected in very trying circumstances”. Early the following morning Walter helped to evacuate the wounded, being hit himself on several occasions in the groin, right leg and chest. He was carried to safety by his comrades.

He was invalided out of the Marines in 1916 and returned home to Stapleford. In 1936 he died at the age of 55 and is buried in Stapleford Cemetery. A memorial service in his honour is held annually at Stapleford on the Sunday nearest the 30 April. His medals are displayed at the Royal Marines museum, Southsea.