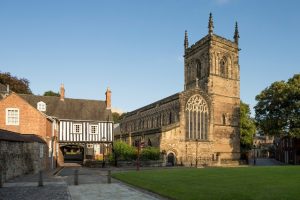 Clustered around The Newarke and De Montfort University campus, just minutes from the city centre, are remarkable buildings that tell the story of Leicester from its medieval origins to its manufacturing heyday.

During the last Sunday of the month visitors can explore some of these historic places free of charge. The area also has lovely outdoor spaces to discover including Castle Gardens and the tranquility of some of the city’s beautiful secret gardens.

Blue Badge guided tours of the Magazine and Castle Great Hall (From May 2017) can also be booked for a small fee.

What Can I Visit?

The Magazine
Originally a 15th century gateway into the former Newarke religious precinct, this striking stone building was later used as a munitions store during the English Civil War. Interesting features of this three storey building include graffiti dating back to the 16th century. Pre-booked guided tour available at 11am.

Leicester Castle Great Hall (Opening May 2017)
Built in the 12th century, the timber-framed Great Hall has hosted many illustrious visitors including Richard III and other kings. It hosted Parliament in the 14th and 15th centuries and today features an original Victorian criminal courtroom. Follow themed audio trails about the Castle using your mobile device by visiting www.leicestercastle.co.uk while on site. Pre-booked guided tour available at 12.30pm.

Trinity Hospital Chapel
Inside the university’s Trinity House building can be found a stone chapel that originally served the medieval Trinity Hospital, founded in 1330 to care for the poor and infirm. Drop-in guided tours available.

Newarke Houses Museum
Created from two historic houses that date from the 16th century, this museum tells the story of Leicester. Discover how we used to live in the recreated street and find out about the industries that made Leicester wealthy. The museum incorporates the Royal Leicestershire Regimental Museum. For information on regular opening times visit the museum website.

Heritage Panels
Across the city a series of themed heritage panels celebrate the story of Leicester from Roman times to the present day (www.visitleicester.info/heritagepanels). Look out for these on campus celebrating the industrial history of the city. Others, relating to King Richard III’s Medieval Leicester, are linked by a walking trail which can be downloaded on www.visitleicester.info/richardIII

Castle Motte
In 1068, just after the Norman Conquest of 1066, Leicester Castle would have consisted of an earth mound (or motte) with a timber tower (or keep) on top. Climb to the top of the motte for views over Castle Yard, The Newarke and Castle Gardens.

St Mary de Castro Church
Open just for Christian worship on Sundays, this historic church was founded as a chapel to serve the medieval castle. Henry IV was knighted here as a boy and Chaucer married here in the 1360s. Although much altered since medieval times, the church still retains many of its early features.

Turret Gateway
Built in 1423, the Turret Gateway separated the Newarke religious precinct from Leicester Castle. Locally it is also known as Ruperts Gateway as Prince Rupert and King Charles I commanded the royalist army that captured Leicester Castle in 1645 during the English Civil War.

Newarke Houses Garden
The herb garden at Newarke Houses Museum is one of the oldest gardens in Leicester. Together with a later Regency style garden, they provide a beautiful haven for rare plants and wildlife. The Newarke wall can be seen in the garden, complete with gun loops used to defend the area during the English Civil War.

Guided Tours
Guided tours of Leicester Castle Great Hall and the Magazine are available on the last Sunday of the month with a Blue Badge Guide. Booking essential. £2.50 per building or £4 for tours of both on the same day. Each tour lasts one hour. Book through Visit Leicester (0116 299 4444) or online at www.goleicestershire.com.

(Please note tours are not suitable for small children who may need to be carried; there are stairs at both sites. Suitable footwear is advisable.)