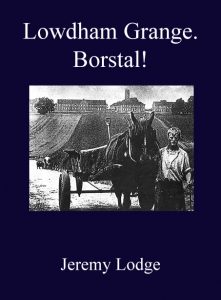 In 1895 when children could be sentenced to hard labour in an adult prison for minor offences, a Home Office Committee  report envisaged for juvenile-offenders

‘… a halfway house between the prison and reformatory.  It should be situated in the country with ample space for agriculture and land reclamation work.   It should have penal and coercive sides according to the merits of particular cases.  But should be amply provided with staff capable of giving sound education, able to train inmates in various kinds of industrial work, and qualified generally to exercise the best and healthiest kind of moral influence.’

Eleven years later, a future prison reformer Alexander Paterson wrote after visiting a teenage offender in jail: that he was;

“deeply shocked by the sight of convicts with their broad arrow uniforms, closely shaven heads, and faces covered with a sort of dirty moss (they were only allowed to shave with clippers). No child could recognise their father in such a condition, no girl or wife could believe that they loved a man who looked like that. As they saw us coming, each man ran to the nearest wall and put his face closely against it, remaining in this servile position till we had passed behind him”

It took another twenty-four years of work by Alexander Paterson and many others to turn the Home Office Committee’s vision into reality.  That reality was Lowdham Grange, the historic borstal, which was opened in 1930.  Living initially in tents,  the young offenders, trained and supervised by local tradesmen built a pioneering  Open Borstal which had no walls or fences.  They and staff from the prison service, with the continued support of Paterson and others, created a building and a system that was to survive, against the odds, for some 50 years.  Lowdham Grange Borstal  was to attract professional, political, academic and press attention from around the world throughout its lifetime.

This richly illustrated book commences by describing the fate of young people in the English penal system in the 1800s; it then explores some of the challenges, developments and people who created this innovative institution in the Nottinghamshire countryside.  Also primarily, drawing on the testimonies of former staff and their families, former borstal lads and locals; the author draws a picture of what it was like to live and work at Lowdham Grange Borstal until its closure in 1982 and its demolition in the following decade.

The author, Jeremy Lodge, lived at Lowdham Grange where his father was a Prison Officer on his first posting in 1963.  He attended Lowdham Primary and Carlton-Le-Willows Grammar Schools then gained a degree at Lancaster University.  Returning to Nottinghamshire after several years, Jeremy spent most of his career in management, research and development roles for Nottinghamshire County Council and Nottinghamshire Fire and Rescue Service; which included working with many of Nottinghamshire’s community, voluntary and statutory organisations.  During this time he lived in Arnold, Calverton, Collingham, Mapperley and Ravenshead. He has been awarded Masters Degrees by Nottingham Trent and Sheffield Hallam Universities.

Jeremy’s` long-term interest in history led to his voluntary work with the Southwell Diocese/Nottingham University Church History Project and his publication of  several e-books based on his wider research on a number of churches.  He is also a volunteer for the International Bomber Command Centre in Lincoln and is involved with The Nottinghamshire Local History Association, The Friends of the Centre for English Local History (Leicester), Collingham and District Local History Society, and is the Treasurer of a national nurses organisation (BARNA).   He has recently completed an MA in English Local History at the University of Leicester where an analysis of the origins and early years of Lowdham Grange  Borstal was the subject of his dissertation.   Jeremy has also written  books on the history of Collingham and its surrounds east of the river Trent and continues to research and write about Lowdham Grange Borstal where his current book is in its third print run.