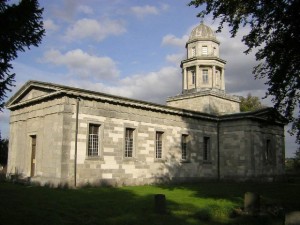 Completed in 1833, this splendid classical building with its domed tower was designed by Sir Robert Smirke, inspired by a temple he had visited on the banks of the Ilyus at Athens. Commissioned by the 4th Duke of Newcastle as a mausoleum for his wife, designed to reflect the family’s wealth and status, the building is unusual in that a parish church is incorporated into the mausoleum, with the nave separated from it by an elegant Ionic reredos screen. Inside is Sir Richard Westmacott’s stunning marble memorial to Georgiana, Duchess of Newcastle, and her twin babies.

In 1949 financial difficulties forced the Duke to inform the diocese that he was no longer able to fund its upkeep. After years of disrepair, neglect and vandalism the Mausoleum was rescued by the Redundant Churches Fund, now known as The Churches Conservation Trust, a national charity protecting historic churches at risk.