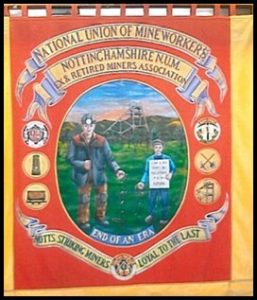 The Nottinghamshire NUM Ex-and-Retired Miners’ Association is looking to raise £250,000 to buy a building capable of housing a traditional museum. The building would also feature a virtual-reality room, education space for school groups, storage and offices. The Association is setting up a charity, called Nottinghamshire Mining Museum, to apply for grants from both the Heritage Lottery Fund and the Big Lottery grants.

The idea is to be able to pass on to future generations the industrial heritage of coal mining in Nottinghamshire and the surrounding counties and present this in a lively way for the benefit of the local community.

The museum would reflect how the Nottinghamshire coalfield was one of the most successful in Europe. At its peak, it had 42 collieries and 40,000 miners, but its 750-year history was brought to an end with the closure of Thoresby Colliery in July 2015. Five months later, deep coal mining in the UK finished for good when Kellingley Colliery in Yorkshire ceased operation. However, there is clearly an appetite among the public to preserve the industry’s heritage.

The Nottinghamshire NUM Ex and Retired Miners Association, which is based at Byron House, Commercial Street, Mansfield, is also seeking to collect artefacts for the museum. Those secured to date are being preserved at Mansfield Railway Station, thanks to help from Mansfield District Council. The Association, which is also looking for opportunities to hold ‘pop up’ museums in Mansfield and Sutton, runs between four and six mining road shows in schools every year and has won an award for this work. It hopes to create partnerships with other community, arts, theatre and heritage groups to promote community pride in its coal mining history.

For more information e-mail the association at exandretiredminers@hotmail.co.uk, or ring Eric Eaton on 01623 416895.