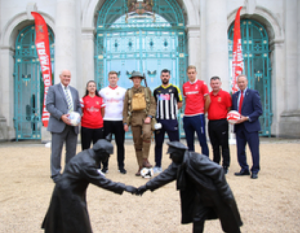 To mark the Centenary of the end of World War One, the Games of Remembrance Project will not only bring a very special event to Nottingham, Nottinghamshire and the East Midlands but will also include a National Education Programme, a National Awareness Programme and a National Legacy Programme – we hope you can be part of the Project and come to a match.

More details about the Games of Remembrance project can be found at https://www.gamesofremembrance.com/

Groups may wish to “Film a Tribute” to remember the nearly 300 Professional Footballer-Soldiers who died in World War One, the several 1000 professional footballers who joined up and fought in the War, the tens of 1000s of local amateur footballers who also fought in the War and a generation of women who made vital contributions to the War effort as well as keeping football alive during the War period. It is hoped that this will develop the awareness of World War One among young people who enjoy football – the attached guide will provide examples and all the information they will need.

One of the Games of Remembrance on Thursday 8 November 2018 is scheduled for a 7pm kick off to make it as accessible as possible community groups. The match will also have a youth friendly Fan Zone which will focus on history, fun, information, music and football. The match experience will include loads of activities, displays, military music and will create a very special commemoration occasion in full partnership with the German Armed Forces.

As many free tickets will be provided to organised community group trips as possible and it may also be possible to fund coach/bus travel for some groups in the East Midlands region. If you are interested in conducting a group trip to the Games of Remembrance on Thu 8 Nov 2018 please could you send an email to gamesofremembrance@gmail.com with the following information (for planning purposes):

Name and address of Community Group:

We would be interested in bringing a community group trip to the 7pm Kick Off match?:

How large do you think your community group trip would be (adults and children)?