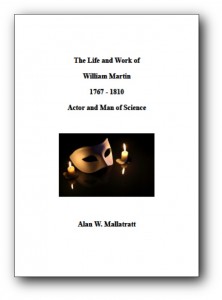 William Martin, the principal subject of this work, was born in Mansfield, Nottinghamshire in 1767. From his earliest childhood, he was raised in a one-parent family, owing to his mother Ann having been deserted by her feckless husband. Economic circumstances obliged Ann to seek a career on the provincial stage, which in turn became William’s destiny. He however, was to become more than a successful comic actor. He was also a pioneer in the field of palaeontology and geology, as well as a reputable artist, engraver and teacher. Employment with a touring company obliged actors to lead the life of a gypsy. For the stock-player, this meant very little remuneration, which was the lot of William and his mother. By sheer chance, a number of Buxton, Derbyshire Theatre playbills have survived from the  latter part of the 18th century and into the early decades of the 19th century. It is from this treasure house, that it has been possible to resurrect long forgotten plays, plots and characters. At the same time, it has enabled quite a comprehensive theatrical picture to be drawn, not only of the lives of the Martins, but also of their peers, including larger than life personalities such as George Frederick Cooke. But more than that, it has enabled glimpses to be made of much of the Hanoverian period; life in the spa town of Buxton and its wealthy patrons of the theatre. The reader may also feel a tinge of sadness, that William Martin, through financial difficulties and a fatal illness, was never able to fulfil all of his early promise as a polymath.

The books is available now and can be obtained from Alan Mallatratt at 12 Twyford Gardens,
Grantham, Lincolnshire, NG31 9BY at a cost of £10 each, postage and package will be inclusive.