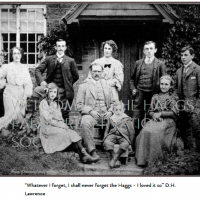 D.H. Lawrence found in Haggs Farm, Underwood, Nottinghamshire, the people who lived there and the surrounding countryside, his “first incentive to write”. The farm and the Chambers family who resided there at the turn of the century provided the models for Miriam’s farm and family in Sons and Lovers,  (the Miriam  Leivers character being closely based on that of Jessie Chambers) and inspired his first novel The White Peacock, as well as many of his early poems and short stories.

The Haggs Farm Preservation Society was formed in March 1986 to encourage the preservation  of the farm buildings and to reinforce the vital importance of Haggs Farm to the early formative years of D.H. Lawrence’s development as an internationally renowned writer.