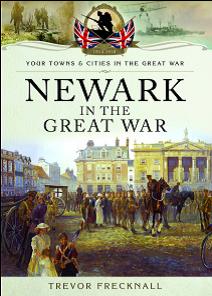 Your Towns & Cities in the Great War

Using the military events as a background, this new series
aims to tell the story of how five years of world war
affected local communities in this country.

The impact of the war was dramatic, making lasting
changes to the social order, as men died or were maimed
in their hundreds of thousands. Women, who had been
engaged in the struggle for emancipation, were suddenly
launched into occupations formerly occupied by men,
forcing a change in attitudes towards the role of women
in society forever.

Through words and pictures, the series records how each year of the war brought about a change in the spirit of the populace, as the huge battles taking place in Belgium, France, Gallipoli and elsewhere, took their toll.

Our expert authors tell the stories of the cities and towns by researching the local newspapers of the day; letters, diaries, photograph albums, parish magazines, trade
journals and contemporary printed pamphlets located in the local library archives.
The result is a personal and moving account of how one of the most important conflicts in human history affected those on the homefront.

RRP: £14.99
ISBN:9781783831678
240 PAGES • PAPERBACK
PUBLISHED: AUGUST 2014 by PEN & SWORD MILITARY
KEY POINTS
• A new series to mark 100 years since the Great War.
• Over 100 titles due for release over the course of the anniversary.
• Examines the experiences of individual towns and cities from
1914-1918.
• How the war impacted on families and businesses, changing
the way we lived forever.
• Eyewitness accounts and personal stories.