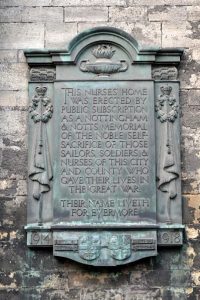 The memorial, including the nurses homes, was conceived as a memorial to all of the war dead from Nottingham, in the region of 14,000 people, and followed a campaign by ex-servicemen in 1919 to have a ‘useful’ memorial. Of course it is one of several memorials in the City.

The memorial bronzes being restored now refer to the homes above, which came into NHS ownership in 1948, and were finally sold on closure of the General Hospital site in the 1990s.

Following closure of the site by the NHS, the memorial bronzes were not restored when the building was converted to apartments, so they have looked rather neglected in recent years.

Working jointly with the owners, The Park Conservation Trust sought funding to carry out restoration work in time for the centenary of the 1918 armistice, in November.

Restoration work has been funded by:

More information about the memorial is available here:

Restoration work is scheduled to be complete by late October (and the area around the plaques is already completed), in time for the Armistice centenary date.

There has been some local press coverage of the work: