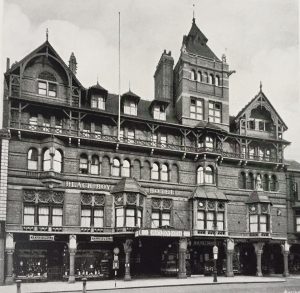 Nottingham Industrial Museum is pleased to announce the launch of a new exhibition by researcher Richard Upton detailing the history of the well-loved, but long demolished Black Boy Hotel.

Open at weekends (including Bank Holiday Monday) throughout August, the exhibition will give a detailed history including architects plans, photographs and a carefully reconstructed scale model of Fothergill’s glorious building.

Located on Long Row in the City Centre, the Black Boy Hotel was rebuilt on the site of a 17th century inn in the late 1880s by renowned local architect Watson Fothergill. Credited as having had a great impact on the architecture of Nottingham, Fothergill designed over a hundred buildings in the city, from offices, banks and warehouses, to churches and private dwelling houses. His easily recognisable style includes the use of contrasting horizontal bands of red and blue brick, dark timber eaves and balconies, and elaborate turrets and stone carving.

The Black Boy Hotel was described in the 1939 Official Guide to Nottingham as being “established centuries ago as a posting house, by judicious planning and reconstruction it has been transformed into one of the most up-to-date hostelries in the Midlands. There are 90 bedrooms all fitted with hot and cold running water, and several bedrooms have communicating private bathroom and toilet accommodation. Self-contained suites are also available. The hotel is centrally heated and all floors are served by electric lifts. The Black Boy enjoys an unrivalled reputation for its catering and has excellent accommodation for banquets, balls and social functions of all kinds…There is a gentlemen’s hairdressing saloon, on the premises”.

The building survived until 1970 when it was demolished amidst great public outcry and sadness to make way for a new building which was occupied by Littlewoods, and more recently Primark. This new modernist build is in stark contrast to Fothergill’s easily identifiable style.

Private weekday group tours of the museum and the exhibition are available to pre-book for specialist interest groups and local history societies – please email tours@nottinghamindustrialmuseum.co.uk for more information.

Entrance to the exhibition is included as part of the normal Museum entry charge and of course the museum and all its galleries and displays are open as usual.

Wheelchair and pram access throughout the museum (apart from the upper observation decks in the Steam Hall).