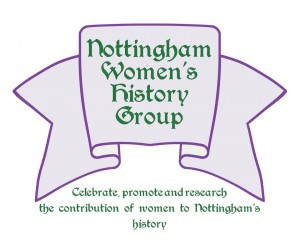 A small group of women plan events and research priorities for NWHG. The trustees for NWHG are Val Wood (chair), Mo Cooper (secretary, treasurer), Sian Trafford and Rowena Edlin-White. Other people have attended the planning sessions during the year and taken on different aspects of the work. All active members are volunteers and do not receive payments for their work. Thanks go to this small but dedicated team!

There is no charge to join the group and NWHG currently has 230 people on their membership list.

According to their constitution all trustees must stand down at the AGM. The group will take further nominations at the AGM. They would welcome more trustees, people to help with the planning meeting, or to carry out tasks such as publicity, face book, web site management, event support, delivering talks, research and finance.

In August the group  published their first booklet entitled Nottingham Women in WW1. The booklet covers VADs, munitions workers, women working on the land and in forestry; telephonists, bus drivers, Girl Guides and entertainers – and – the suffragists who were biding their time…. The booklet was developed as a response to requests for information from the media and others for the centenary anniversary of the first year of World War 1.

This year Helen Cooper and her son Danny have been responsible for reworking the NWHG logo and printed a banner to be used at events.

The group were keen to progress with a project featuring blue plaques but the City Council are not supporting any plaques at present and this will be revisited at a later date.

NWHG continues to respond to enquiries from press, researchers and members of the public within their limited resources.

The group has been busy researching the suffragette movement in Nottingham and disseminating this work which will form the main focus for 2015. This will include Rowena Edlin-White’s talk at the AGM, a new booklet and new walks in the summer.