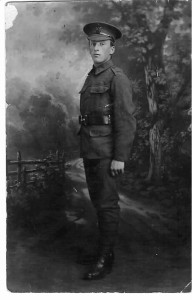 Will Slate, one of the many young men who served in World War I.

The challenge was to write a poem, diary or letter home to loved ones about life in the front line trenches of France and Belgium and more than 450 school pupils from primary and secondary schools in the county took part.

The NLHA contributed £200 towards the total prize money which was given out as Amazon book tokens. John Parker, Chairman of the NLHA, handed out some of the prizes to participants and the judging panel consisted of our vice-chairman, Chris Weir, with David Belbin, English lecturer at Nottingham Trent University; Angela Berry, of the Western Front Association Remembrance Society and Charles Walker, deputy editor of the Nottingham Post.

John Parker said ‘Nottinghamshire Local History Association is pleased to be able to support our colleagues in the Trent-to-Trenches partnership in their project to encourage young people at local schools to create inspirational pieces of writing to commemorate the events, people and experiences of the Great War in the form of a poem, a diary entry or a letter home. It is important that we work to get young people involved in and aware of their own heritage and local history and the Great War commemorations are an ideal opportunity to explore the transforming effect the war had on the World in general and on Nottinghamshire in particular.’