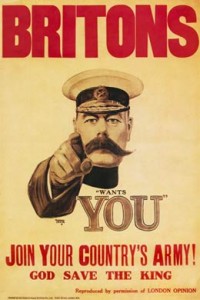 From 15 – 26 July Lakeside Arts Theatre’s production of Oh What A Lovely War will mark the centenary of the First World War. Lakeside would like to offer everyone at the Nottinghamshire Local History Association tickets at concession prices to the show; all you have to do is call the Box Office and let them know you are from the NLHA. This offer is available to NLHA members and members of organisations who are part of NLHA.

It’s 1914 and Europe is on the brink of war. Your king and country need you. So be a man and enlist today!

Oh What A Lovely War takes the ideas of satire and ensemble musical to a whole new level – inviting the audience to consider the horror and pointlessness of the war by presenting a funny, lyrical evocation of the first world war and making them laugh at the pointlessness of it all.

This production, directed by Martin Berry (Lysistrata, Sweeney Todd, Little Shop of Horrors)will tell the story of one of the defining events of the twentieth century through songs, audience interaction, game playing and laughter, as a cast of all ages open up a toybox of images, musical instruments, costumes and props to create scenes of the trenches, the seaside, a forest, battlefields and much more.

An amateur production by arrangement with Samuel French Ltd.