Newark Archaeological and Local History Society is planning further plaques for Newark. Started in 1973 and part-funded by Town Tours and Slide/Tape Presentations that are done  for groups, Thomas Earp will be the next one, later this year.  The plaque will be on the ‘White House’ in Millgate, and will be a combined venture between NALHS and Millgate Conservation Society.  This will be the 19th plaque the Society has been responsible for in Newark. 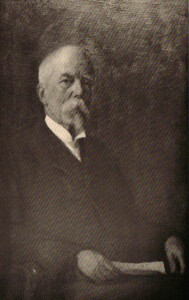 Thomas Magnus, with typical Tudor confidence, founded the free school he gave to Newark on the ideas relevant to his time. He did not have the doubts that became common later when education was given importance not so much as a blessing for the individual, but a way of moulding society into a work force, or a means of class distinction.

By the time Thomas Earp was born in 1830 the Industrial Revolution required labourers who had received some education and funds were made available nationally for school building, although most children left school before they were eleven years old. Ability to read was the main object of elementary education, but some taxpayers feared this might give them access to seditious pamphlets or publications against Christianity. Many argued that further or secondary education could be dangerous for the poor, teaching them to despise laborious occupations. Even such subjects as writing and arithmetic were questioned.

Fortunate towns like Newark that already had a free Grammar School faced difficulties because the church based education provided was too narrow for new requirements. Enlightened headmasters and governors realised the need for change, but funding obtained from endowments was falling because of the decline in agriculture. As the population and industry grew, so did the need for such subjects as geography, history, science, mathematics, modern languages, drawing, and bookkeeping, while still retaining Latin. How to accommodate them in the dated buildings they had, find qualified teachers or the money to pay them and boys willing and able to absorb such a curriculum was a problem facing the school and its Governors.

The suggestion that fees could be charged, if only for certain subjects, was not favoured by many. Education faced a local and a national upheaval, but a solution had to be found.

“Cometh the hour, cometh the man”. When Thomas Earp came to Newark to start work at Harvey’s Wine and Spirit Merchants and Maltsters in 1845, the railway system was opening up trade right across the country. In the very next year, the first Newark line from Nottingham to Lincoln brought great opportunities for the brewing trade and also to the sixteen-year-old Thomas Earp. He became a partner in Harvey’s, then of Richardson Earp and Slater and finally established Gilstrap and Earp.

At his adoption as Liberal candidate in 1873 the Newark Herald commented on his outstanding speaking ability, noting “the relationship between Mr Earp and the working classes from whom he is removed by only one generation.” The time when Employers and Labourers were fixed not only for a lifetime but also for generations into the sphere in which they had been born was coming to an end.

In 1870 a national system of schools was established so that every child had the opportunity of education and in 1891 education became compulsory. Great reforms were taking place when Thomas Earp entered Parliament in 1874 and he was well aware that coming generations needed to be educated to meet the changes. Town dwelling working class people were given the vote in 1887 and farm labourers were enfranchised in 1884. If employers and workers remained ignorant of each other’s contribution to society, dissension would threaten the prosperity promised by better transport and increased trade.

Despite the efforts made by Thomas Magnus to safeguard his bequest to the school, at various times in its history money had been taken for the use of the Parish Church and the town. In addition, efforts by the Government to give a modern education to the whole population did not conform to the old ideas of a traditional schooling providing a ruling class through the universities, and schools like Magnus had been founded for just that purpose. At a time when more money was needed to extend the curriculum and the buildings, less was available and a growing town needed sanitation and lighting, therefore the endowment funds were occasionally misappropriated. Thomas Earp was aware of this and also that despite the efforts of various headmasters to maintain standards at the school some boys were not receiving the best preparation for their future. Valuable potential for them and for the town was lost because the emphasis was still on the learned professions and those with more practical abilities were regarded as a lesser breed.

Some additions to the building were made in 1818, partly funded by the headmaster Mr Wittenoom who intended to use some of the accommodation for boarders. The fees they paid would go not to the school but to Mr Wittenoom. In 1820, there were ninety-two boarders, those under twelve paying £34 a year and those over that age £40. They paid an extra   a year to be taught subjects in which they were really interested. The Foundation or Free Scholars received only a classical education. This was of little use to boys who would earn their living mainly by manual labour, yet they were the very ones who could not afford the fees for extra subjects.

A science laboratory was helped into existence by the County Council in 1818
and in 1834 the Magnus Trustees built the English School, partly to conform to the new Government demands for the modernisation of education. For some reason, although free, the English School was not popular with the Newark tradesmen who preferred to send their sons to another school in the town called “The Classical and Commercial Academy” situated in Castlegate and charging fees of twenty-four to twenty-eight guineas a year for boarders, with day boys paying four guineas a year. It appears to have been very successful, at times having over a hundred pupils.

Meanwhile the Magnus, under the headmastership of Mr Wittenoom was suffering from falling numbers. After he left in 1829, Joseph Cooke was there until 1854 and was followed by Henry Plater who stated his belief as a schoolmaster that “scholastic work (as I interpret it) is in its measure spiritual work combined with sound mental training, and I believe, and have always taught, that all education, worthy of the name, must be based on, and in accord with, the doctrines and teaching of the Holy Catholic Church.” There was some anxiety in the town that Mr Plater had Roman Catholic leanings and would influence the school in this way. He certainly was a High Churchman when such an attitude was unpopular, but because of his great sense of duty Magnus began again to prosper as a school. In 1877 he offered a re-organisation scheme that gained some approval from Thomas Earp who was chairman of the committee formed to modernise the school, working with the Endowed Schools Commission and the people of Newark, together with the Trustees of the Endowment. However Mr Plater was firmly in favour of a First Grade School, something akin to Rugby, catering for boarders from outside the area, while Mr Earp wanted the school to modernise the curriculum and provide businessmen who would add to the prosperity of the town. In order to achieve his aims, Councillor Earp brought in fellow Liberals who gradually displaced Councillors and Trustees who supported Mr Plater’s ideals.

The number of boys in the school had risen to 126, seventy-five of whom were boarders. Mr Plater had bought property in Appletongate for a chemistry laboratory and workshops equipped with lathes, proof that he was prepared to modify his attitude to classical education, but the charity Commissioners in 1887 found that good though his Scheme was, the available finance was insufficient. Parents lost confidence in spite of all Mr Plater’s efforts, and when he retired in 1893 the Governing body took a look at the school premises, compared them with the new board School that had been built in Lovers Lane, and advertised for a new headmaster.

The whole premises were then spring-cleaned, seating forms replaced with individual desks and separate lockers, lobbies with pegs for the boys to hang their coats and hats. Dormitories for at least thirty boarders had been refurbished.

The new Headmaster, Mr Noakes, by the end of his first year had done much to bring the school into the life of the town. He wished that the school should be mainly for the benefit of Newark and the district. Consequently a first public prize-giving was held in the Town Hall and the roll had risen to seventy-eight boys.

In June 1895 the headmaster was requesting a gymnasium, a library and a more adequate playground as well as a playing field reasonably close to the school.

The first Founder’s day was held with Holy Communion at 8.00amand another service at 10.00amwith a sermon preached by an Old Magnusian the Rev. F W Greenwood from Liverpool. This was followed by a cricket match at 11.30, lunch at half past one with many long speeches and then tea at five-o-‘clock.
Improvements to the Old Magnus premises continued to be made and academic progress was very satisfactory between 1895 and 1902, but the Inspectors of the Board of Education condemned the old school in 1897 and directed that proper buildings should be provided as soon as may be. Since 1887 the income from the endowment had been insufficient and it had been impossible to save towards a new building, and if they broke into the capital it may prove impossible to maintain it, even with increased fees. Mr Earp, vice-chairman of the Governors, found and bought a site of six acres just off London Road, which he presented to the school. His generosity prompted the Governors to launch an appeal in the neighbourhood and among old boys for between £3,000 and £3,500. Gifts came from other sources and Councillor Earp gave a further four acres of land.

Dr Noakes, who had made such an impressive start as Headmaster announced his resignation. This was unfortunate because his popularity had greatly helped the school and now it was felt the impetus of the Appeal would be lost, especially as Dr Noakes publicly regretted that so much money had already been spent on the old building and that a new one might prove an expensive mistake. Councillor Earp however was determined to see a new school provided. As financial problems increased and progress almost ceased, he gave £2,000 and offered a loan of £3000. This failed to arouse interest and so he gave £5,000 outright.

The response of the public was still insufficient to convince the Board of Education and the County Council that there would be capital to cover all the outlay including equipment and increased expenditure on staff, especially as the Governors were contemplating selling £1,800 of Government Stock from the Endowment, so reducing income. There was serious concern that the new school might become insolvent and have to be closed down. Governors began to lose interest and failed to come to meetings. Councillor Earp felt that some bore lingering grudges because of his attitude to Mr Plater, who though as a headmaster had aroused much criticism, had represented the old order of things in Newark.

Consequently, Councillor Earp on learning that the Board of Education was contemplating providing a new school for only a hundred boys, threatened to withdraw everything he had given and promised. He went to see the President of the Board and obtained the sanction of a school for 150 boys, whereupon Mr Earp paid £290 for the revised architect’s fees. In all he is believed to have contributed more than £10,000 to the new building, but much more is owed to him for his commitment to a project he believed to be vital for Newark, and which was accomplished on May 22nd 1909.

(This article, previously printed in a NALHS Newsletter, was written by the late Margaret Granger, who was passionate about the Old Magnus Buildings and its refurbishment)