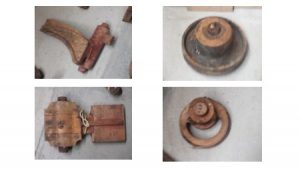 Approximately 200 wooden machine part pattern moulds from the former curtain lace factory at Burgage Green, Southwell are available on FREE loan for a period of months or possibly longer. The parts were found by Gusto Construction at the Burgage Green site which is now being developed for housing in a plan that will reflect the site’s former use as a house of correction, a reformative prison.

The directors of Gusto have agreed to the loan of the pattern moulds on temporary basis until such time as a suitable heritage centre is established in Southwell itself.

The earliest known use of the Burgage Green site was as a brickworks owned by Rev. Richard Barrow. In 1808 it was acquired by the local magistrates to build the state of the art Nottinghamshire House of Correction to replace the former prison of 1611 about 80 yards away. The new house of correction was a model establishment the regulations for which were adopted by a Parliamentary Committee of 1811 for use in prisons throughout the UK and copied in a modified form in the USA.

After the prison closed in 1880 the buildings were converted by the authorities for manufacturing. The first occupant was W G Gregory, a lace manufacturer, for a few years from about 1885 until they decided to concentrate their production at Canal Street. By 1900, lace makers W Carey and Sons had moved all of their Bulwell production, apart from their dyeworks, into Southwell. They maintained a warehouse at Broad Street in the Lace Market and it is recorded that they had production premises in Hyson Green as early as 1834.

At Southwell, Carey employed from 150-200 people operating two shifts 5 am to 2 pm and 2 pm to 11 pm. Products included blouses, table cloths, curtains and antimacassars before they began to specialise in curtain lace. The early wages were 7s 6d for five days plus the option of 6d for three hours on a Saturday. Cyril Flowers worked from 1929 to 1956 except for his war service years. His final task was to dismantle the machines for shipment to Greece. Males were employed mainly as twist hands but some were employed in the workshops and boiler room. Many women were engaged in threading brass bobbins in the winding room from cotton supplied on ‘cheeses’ from Stalybridge while others inspected, sorted and mended output in the Empire Room. Raw product in white or cream was often sent to Bulwell for dyeing but some fancy lace products used pre-dyed cotton and silk.

Steam power from coal-fired boilers heated by furnaces drove the production shafts and pulleys and also a dynamo for electric lighting. For heating, steam was drawn through pipes. The 47 curtain lace machines were controlled by punched cards akin to the Jacquard system, the cards being produced in the former prison chapel. Joiners were employed to make the wooden pattern moulds for the forging and casting of spare parts for machines. Black lead was used for machine lubrication to prevent contamination from oil.

At the entrance to the site, the former prison reception lodge, there is a memorial to those employees that were lost during the war of 1914-18. During WW2 the 49 curtain lace manufacturers of the East Midlands and Scotland formed British Lace Furnishing Limited for economic control of the industry and its contribution towards the war effort. Their head office was based at the Carey warehouse in Broad Street. Only about half of the machines were operated due to the shortage of labour caused by military service and, of those, suitable machines were adapted for defensive products. These included anti-splinter netting for windows to prevent bomb-blasted shards of glass entering rooms and causing injury and also sandfly, mosquito and camouflage netting. The company controlled the cooperative maintenance of the industry’s machines during the conflict. At this time Carey was responsible for slightly less than 3% of UK industry output.

Nottingham curtain lace is defined as product made on machines developed in Nottingham, but in fact most of the production took place elsewhere, especially in Scotland. Recently, the undersigned visited the Haddow Aird Crerar Ltd factory in Newmilns, Ayrshire, where they continue to use Nottingham-built machinery similar to that used at Carey but for making wide plain nets for screens, backdrops etc. and for safety netting for concert halls and theatres in several countries including touring companies. Samples of the output from Newmilns have been obtained and are available for display with the pattern moulds. Also available are photographs from the early twentieth century depicting workrooms at Carey, including the pattern making shop, along with an embossing company stamp from W G Gregory for authenticating their correspondence. It may also be possible to include with the collection a limited amount of house of correction material, images and documentation.

Please get in touch

If you are interested in featuring all or some of the above items in a long or short-term display, or know someone who might be, please get in touch. It is possible to divide the collection between several venues, but as stated, it is intended that the items are returnable to Southwell if and when a suitable heritage centre is established. Naturally, an acknowledgement of the donor, Gusto Construction, will be required adjacent to any display.