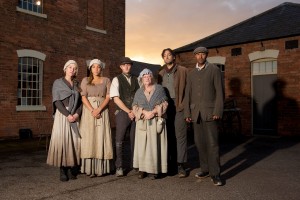 The Workhouse at Southwell was chosen as a location for the series as it is the most complete surviving example of its kind. Now in the care of the National Trust, The Workhouse is open to the public where visitors can find out about the harsh conditions endured by workhouse inmates. ‘Visitors can explore facts and fiction surrounding workhouse life and decide for themselves whether the celebrities had a hard time compared to Victorian paupers’, says Alison Cross, Visitor Experience Manager.

Celebrities Ann Widdecombe, Tyger Drew-Honey, Alistair McGowan, Colin Jackson, Miquita Oliver and Zoe Lucker endured the back-breaking workhouse regime, slept in dormitories and even had to empty their chamber pots in the privies. But it was not just the celebrities that had to endure hardship, many of The Workhouse volunteers worked hard as extras.

Annette Hambidge, who played Matron, had always wanted to spend a night at The Workhouse since her first involvement as a volunteer 12 years ago. ‘I hadn’t ever imagined I would be sleeping in costume on a straw mattress on the floor of the children’s dormitory’ she comments.

So who was the best behaved of the celebrities? ‘Zoe Lucker would get my vote’ says Annette ‘and the worst, well, without naming names five of the celebrities had their food docked for failing to complete their tasks of making mattresses and picking oakum’ she adds.

The final episode of the series 24 Hours in the Past which features The Workhouse will be shown on Tuesday 19 May. The accompanying ‘Fact or Fiction’ displays at The Workhouse will run from 17 May.
For more information about The Workhouse, opening times and admission prices please see www.nationaltrust.org.uk/theworkhouse

24 Hours in the Past is produced by DSP, part of Endemol Shine Group.