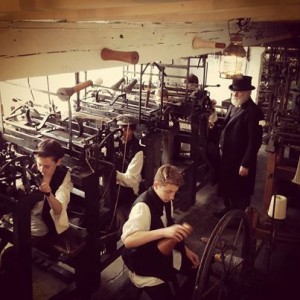 A textile museum in the Nottinghamshire village of Ruddington has achieved success at the European Heritage in Motion Awards. The museum won the websites and online content category with their new interactive film, Breaking the Frame.

The winners were announced at the annual conference of the European Museum Academy, held in Brescia, Italy, on 8 May 2015.

Breaking the Frame is the core of the Museum’s groundbreaking new education programme, which is the second part of the museum’s Heritage Lottery Funded redevelopment. The film, which was partly funded by Nottinghamshire County Council, offers a unique interactive experience in which the audience influence the direction of the story by making decisions on behalf of the lead character at key points in the story. It uses the 200 year old story of the Luddite riots to illustrate the very real decisions children and teenagers face regarding peer pressure and criminality. It was filmed on-site at the Framework Knitters Museum, and at the Galleries of Justice Museum.

You can see the award-winning film here.

Paul Baker, Museum Manager, said “we are absolutely delighted to have won such a prestigious award. We are hugely proud of our new education programme and for our film to be chosen above such esteemed museums is a huge honour.”

Jennifer Spencer, Chief Executive of Experience Nottinghamshire, said “The team at Framework Knitters’ Museum have been working hard to incorporate innovation into their programming to enhance the visitor experience, and it is wonderful to see this work pay off with recognition at a European level.”

The film has also been recognised as pioneering at a more local level and is shortlisted for the Award for Innovation at the East Midlands Heritage Awards 2015. The planning and design of the redevelopment has been undertaken as a collaborative partnership with Rushcliffe School, as well as the students starring in the film and contributing to the production process. This partnership has also been recognised at the awards, and is shortlisted for the Award for Engaging Children and Young People. The winners for these awards will be announced on Tuesday 9 June.

Councillor John Knight, Committee Chairman for Culture, at Nottinghamshire County Council, was recently invited to see the film when it first debuted at the Museum, and said: “The film is very professional and educational and what is particularly great to see is that local children had the chance to get involved in this wonderful project.”

The film and other educational resources have been created to support history and citizenship within the National Curriculum and is available free to all schools from the museum’s website. The interactive film will also be available to the public at the museum on selected days throughout the year. Details will be available on the museum website.