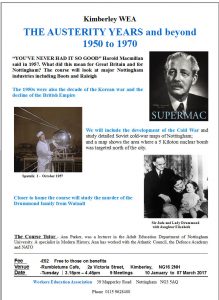 Kimberley WEA are running a course in January ‘The Austerity Years …and beyond’ which will take place at Rumbletums Cafe, 2a Victoria Street, Kimberley NG16 2NH on a Tuesday between 3:15pm and 4:45 pm for nine meetings from 10th january to 7th March 2017.

YOU’VE NEVER HAD IT SO GOOD said Harold MacMillan in 1957. What did this mean for Great Britain and for Nottingham? The course will look at major Nottingham industries including Boots and Raleigh.

The 1960s were also the decade of the Korean war and the decline of the British Empire.

We will include the development of the Cold War and study detailed Soviet cold-war maps of Nottingham including a map showing where a  nuclear bomb was targeted north of the city.

The course will also study the murder of the Drummond family from Watnall.

The course tutor, Ann Parker, was a lecturer in the Adult Education Department of Nottingham University and is a specialist in modern history who has worked for the Atlantic Council, the Defence Academy and NATO

The course fee is £52 (free to those on benefits)