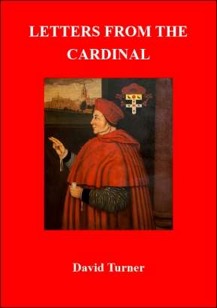 Letters from the Cardinal will be launched at The State Chamber, Archbishop’s Palace, Southwell on Saturday 11th November 2017 at 11:30 am.

In 1530 Cardinal Wolsey, having fallen from favour with Henry VIII, stayed in Southwell for four months on his way to York to take up his appointment as Archbishop of York. In a series of imaginary letters to Thomas Cromwell,
David Turner tells the story, from contemporary records, of Wolsey’s last few months.

This is a fascinating period of history vividly brought to life by David Turner’s pen.

All proceeds to the Leaves of Southwell Project whichThe Minster is hoping will allow it to reinterpret and better present the famous leaf carvings, which can be found in the Chapter House.

The main focus is to interpret the leaves by installing better lighting for visitors to see the carvings found in the Chapter House and around the minster’s pulpit.

The carvings known as The Leaves of Southwell are world renowned. There are images of animals – goats, hares, birds and fabulous creatures – and human heads in portrait and caricature, combining superstition and fable with religious beliefs. There are also many different types of leaf, all of which would have been found in Sherwood Forest.

There are also carvings of ten “Green Men” who have branches of leaves growing from their mouths or who have heads formed of leaves. The origins of the Green Men are obscure. They are found in mythology long before Christianity came to Britain and are linked to rites of fertility, Spring and new birth. If the Green Men represented new birth and new life then they could, perhaps, also represent the resurrection in the Christian context.

In 1945 Nikolaus Pevsner wrote a short book entitled The Leaves of Southwell. It was published as a King Penguin, with photographs by F. L. Attenborough, the principal of University College, Leicester, and father of Sir Dickie and Sir David.