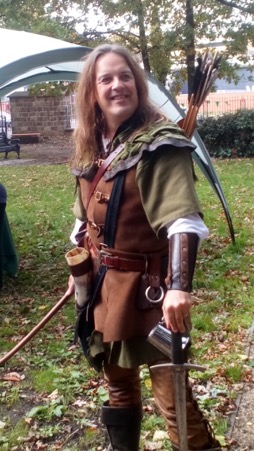 Lenton Community Association made £177.00 on the day through entrance fees and had an attendance of 201 (although it was noted by some that a few people still snuck in through the back gates.)

The priory was established in Lenton, about 1½ miles south-west of Nottingham, by William Peverel in the first years of 1100 and dedicated to the Holy Trinity. The charter of foundation states that Peverel founded the charter “out of love of divine worship and for the good of the souls of his lord King William, of his wife Queen Matilda, of their son King William and of all their and his ancestors”.

William Peverel gave Lenton Priory a substantial endowment which included: the townships of Lenton, Keighton, Morton and Radford (all in Nottingham), Courteenhall, Northamptonshire, and all of their appurtenances and seven mills; land and woodland in Newthorpe and Papplewick; control of the churches of St. Mary, St. Peter and St. Nicholas, all in Nottingham; the churches at Langar, Linby and Radford; the tithes raised from Peverel’s fisheries throughout Nottingham; portions of the tithes from his lands throughout the Peak District including those from Ashford, Bakewell, Bradwell, Buxton, Callow, Chelmorton, Cowdale, Darnall, Dunningestede, Fernilee, Holme, Hucklow, Newbold, Quatford, Shallcross, Stanton, Sterndale, Tideswell and Wormhill; all the tithes raised from his colts and fillies in his stud-farms in the Peak District; the tithes from the lead and venison from his lands in Derbyshire; part of the tithes from Blisworth and Duston and the churches of Courteenhall, Harlestone, Irchester and Rushden, all in Northamptonshire; and the church at Foxton, in Leicestershire.

King Henry II’s charter granted the priory freedom from taxes, tolls, and customs duties. In a further charter he granted them an eight-day fair to celebrate St. Martin’s Day. A charter of Henry III’s extended this fair to twelve days in length.

Lenton’s last prior was Nicholas Heath (or Hethe) who was appointed in 1535, having gained the position due to his connection to Thomas Cromwell. Prior Heath was thrown into prison in February 1538, along with many of his monks. They were accused of high treason and in March the prior with eight of his monks (Ralph Swenson, Richard Bower, Richard Atkinson, Christopher Browne, John Trewruan, John Adelenton, William Berry, and William Gylham) and four labourers of Lenton were executed. The priory was dissolved in 1538.