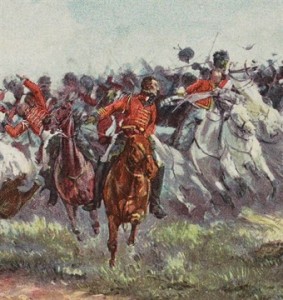 The Napoleonic Wars, which were fought between Britain, France and their allies from 1803, came to an end with the Battle of Waterloo on the 18 June 1815. This exhibition, timed to coincide with the bicentenary of Waterloo, reflects on the conflict in its later stages, from the Peninsular Wars in Spain and Portugal in 1808 to the end of hostilities seven years later.

Drawing on the material from The University of Nottingham’s collections, the exhibition assesses the nature and impact of the war and its consequences.

The displays describe key moments in the conflict, chart the rise to prominence of military commanders such as the Duke of Wellington and reveal Nottinghamshire’s contribution to the war effort.

The exhibition also explores the wider legacy of the wars. In Spain, British forces fought alongside those seeking liberation from foreign conquest. In Britain, the return of peace was accompanied by new demands for political and social change.

The exhibition has been jointly curated by Richard Gaunt (associate Professor of History in the School of Humanities) and Manuscripts and Special Collections at the University of Nottingham.

A series of talks will be held to accompany the exhibition. Places are limited so please book in advance with the Box Office on 0115 846 7777

From the Ballroom to the Battlefield: British Women and Waterloo

Professor Charles Esdaile from the University of Liverpool re-considers Wellington’s command of the Allied forces and the tactics which delivered his ‘immortal victory’.

For years, Britons commemorated the Battle of Waterloo in a myriad of ways. However, after Wellington’s death in 1852, official acts of public commemoration declined as the legacy of Waterloo was both contested and politicised. In this talk, Dr Russ Foster, a specialist on Wellington, considers why this remains the case to this day.

New Scorpion Band is one of the most original groups in British traditional music. Performing on over 20 traditional instruments and dressed in splendid costume, their concert to commemorate the bicentenary of the Battle of Waterloo will include folk songs and instrumental pieces from the period.

Prior to the concert, there will be a Waterloo-themed meal in the Pavilion Cafe. Call the box office for further details.