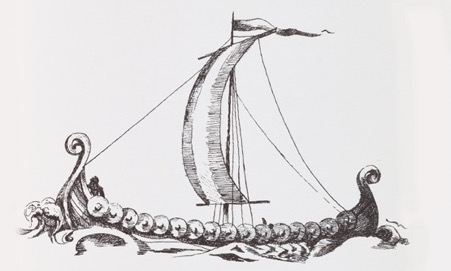 Invade…immigrate…integrate… inspire.  ‘Danelaw Saga’ tells the tale of how the Vikings shaped the East Midlands.

In the 860s the Great Heathen Army invaded the East Midlands, agreeing peace with the Anglo-Saxon King, Alfred the Great, in the 870s. The agreement established the Danelaw where Viking laws and government reigned, giving the Vikings half of England to rule. They settled in the five boroughs of the Danelaw (Derby, Leicester, Lincoln, Nottingham and Stamford) and integrated with the existing population. The legacy of these settlers can still be seen today in place-names like Gunthorpe, Nottinghamshire named after a Viking woman, Gunnhild.

‘Danelaw Saga’ tells a local story of Viking culture with artefacts, maps and medieval documents from Manuscripts and Special Collections at the University of Nottingham and from regional museums. This exhibition presents an opportunity to see extraordinary Viking works brought together and to learn about the places whose names evoke the Viking past. Visitors can map the routes of Viking expeditions, view coins brought from the Middle East to the East Midlands, and explore their heritage further with artefacts and jewellery worn by the Viking women that settled in the East Midlands. ‘Danelaw Saga’ tells the story of Viking heritage hidden in plain sight, from place names in use since they were given by the Vikings to modern literature inspired by the East Midlands’ own Viking past. ‘Danelaw Saga’ uncovers the legacy of the Vikings on our doorstep.

‘Danelaw Saga’ has been jointly curated by Professor Judith Jesch and Dr Roderick Dale of the Centre for Study of the Viking Age, and by Manuscripts and Special Collections at the University of Nottingham. The Bringing Vikings back to the East Midlands project is funded by the Arts and Humanities Research Council.