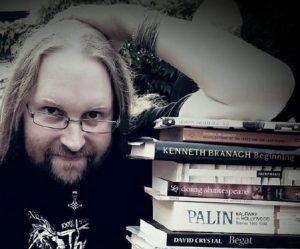 James Wright FSA is an archaeologist and historian based at the University of Nottingham  With over twenty years of professional experience, he has published two books and a string of popular and academic articles concentrating on the British Mediaeval and Early Modern periods. He is a very proficient public speaker and has spoken to a wide variety of organisations including a large number of local history societies, LAMAS, Thoroton Society, WEA, Thames Discovery Programme, Nottinghamshire Local History Association, U3A, Lowdham Book Festival and the Fortean Society. He has also been invited to speak by the University of Nottingham, Gresham College, Shakespeare400, Museum of London, Historic Royal Palaces and the National Trust. He presents in a clear and conversational style (without notes or script) and readily uses illustrative slides throughout his lectures. The talks are adaptable and can be presented to novice, mid-level or expert audiences. Please feel free to make contact in order to discuss a specific booking for a lecture, workshop or conference.

Please feel free to make contact in order to discuss a specific booking for a lecture , workshop or conference. james.wright@nottingham.ac.uk or jpwarchaeology@hotmail.co

His current topics are:

A Palace For Our Kings – The History and Archaeology of a Mediaeval Royal Palace in Sherwood Forest Based on the widely selling book of the same name.

Rock of Ages, Mediaeval Stonemasons: The Architects of Europe – A talk on historic stone masonry and the men who shaped not only the material but the architectural appearance of the Mediaeval period.

Cultural Anxieties and Ritual Protection in High Status Early Modern Houses – The sixteenth and seventeenth centuries were marked by a radical increase in the numbers of accusations of witchcraft throughout Europe.

Tattershall Castle, Building a History – Currently the subject of a three year piece of doctoral research, Tattershall Castle in Lincolnshire is familiar to many as an iconic Mediaeval brick tower constructed for Ralph Cromwell, Lord Treasurer of England.

William Shakespeare, Henry V and the manipulation of history – Contrasting real history with Shakespeare’s play on the life of Henry V, this lecture looks at aspects of the true story of the battle of Agincourt which are often overlooked.

Historic Graffiti, The Hidden Story of the Hopes, Fears and Desires of a Nation – Modern graffiti is often seen as transgressive and moronic. However, look closely in the light of a torch at the walls of our historic buildings, trees, caves and rock-faces and you will see a world of graffiti left that illuminates the psychology of our ancestors .

Castles of Nottinghamshire – Looks in detail at the lesser known earthworks and ruins of lost castles and fortified manor houses in the county.

Recent discoveries of ritual protection marks at Knole, Kent – An historic building survey at Knole, Kent enabled a very surprising revelation about the history of the house in the early 17th century.

Excavating a lost Mediaeval fortified manor house at Strelley Hall, Nottinghamshire –Construction work at the idyllic eighteenth century Strelley Hall led to the chance discovery of the remains of a much older precursor.

One Day Workshops Recording and Analysing Historic Buildings – A series of taught discussion seminar s across a six hour period looking at how buildings archaeologists assess and understand the fabric of our historic buildings on site.

An Introduction to Ecclesiastical Architecture – A combination of discussion seminars, formal lectures and a guided tour introducing the subject of the archaeology and architecture of chapels, churches, monasteries and cathedrals.

Please get in contact to discuss specific fees and expenses which are always based on a case by case situation according to the location and duration of the event. Email: james.wright@nottingham.ac.uk / jpwarchaeology@hotmail.co.uk