On the 24 June the launch of four very well researched and produced publications on ‘Laxton In Peace & War’ was held at Crosshill Farm in the village of Laxton. The volumes were published by Nottinghamshire Local History Association. Other resource materials were also produced as part of an intensive project to research the village at a key time in its history. 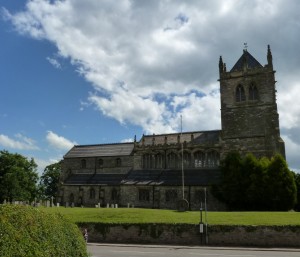 A community had come together for a launch that delighted with extracts from letters of the early 1900s that had been painstakingly researched and catalogued and which brought a community to life in a very difficult period of history. We learn about the village school, Maypole dancing, ploughing matches, Belgian refugees and the evolution of Laxton’s famous Open Fields. 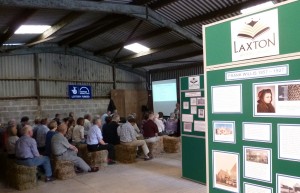 The guests sat in the barn to hear about the lives of local people between 1900-1920 and how members of the community had given time and a lot of hard work to this Heritage Lottery Fund funded project. Links had been established with the University of Nottingham Manuscripts Department, who hold the Manvers Papers and the project had proceeded with the invaluable support of Professor John Beckett. 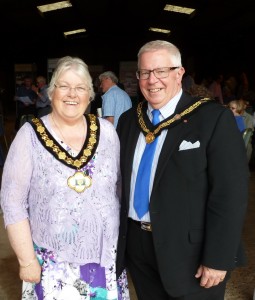 Among the guests were Yvonne Woodhead, Chair of Nottinghamshire County Council and Tony Roberts, Chair of Newark & Sherwood District Council. Tony Roberts commented that this excellent project was especially important as ‘it recorded and remembered the lives of ordinary people’. A Private William Laughton had been born in Laxton in 1887. At the age of 14 he was working as a ‘yard lad’ on a local farm and later became a cow man. He was killed in action on 21st April 1917 and is buried in a war cemetery between Lens and Bethune.

All volumes are plentifully illustrated. These books are not being sold commercially but copies are being deposited with organisations and libraries. They have been designed by Andy Columbine. For further information on the publications or about the Project please contact Laxton Local History Group at www.LaxtonHistoryGroup.org.uk