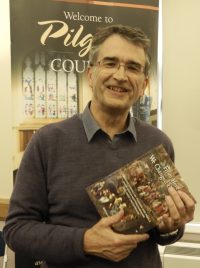 Adrian Gray is based at Laneham, between Retford and Lincoln. He is a graduate of Queens’ College, Cambridge, in History and the author of more than twenty books on aspects of local and national history. He is historical adviser to Bassetlaw Christian Heritage and Pilgrims & Prophets Christian heritage Tours, both of which are community groups working to develop heritage tourism in Notts and Lincs.

All talks can be tailored to last between 60 and 90 minutes. They are fully illustrated. Options for Talks include:

Why did they all come from here?

This talk explains why the Mayflower Pilgrims and the linked group who formed the first Baptists originated in the region of North Notts and West Lincs. It is a good general talk for those wanting to know more about these groups as we prepare for the 400th anniversary of the Mayflower in 2020.

Religious Liberty: A Gift to the World from Notts and Lincs

Ideas about religious liberty now enshrined in the UN declaration of Human Rights can be traced back through the US ‘First Amendment’ to the thinking and writing of men who came from north Notts and Lincolnshire, and whose thinking influenced the writing of early American settlers like Roger Williams, who had intimate connections with both counties. This story was almost forgotten until revived through the annual Bassetlaw Religious Tolerance Forum which has featured on radio 4.

Thomas Helwys: The Price of Freedom

Helwys, a Nottingham man, financed the move of the ‘Pilgrims’ to Holland and there became a Baptist. He risked his own life by returning to England and founding the Baptist denomination, where he wrote the first text in English that argued for religious liberty for all faiths – for which he was imprisoned. Helwys is also notable for his radical theological writings and is one of the most influential men ever to come from Nottinghamshire.

The ‘Black Prince’ of Scunthorpe

The extraordinary story of ‘Salim Wilson’, born a Sudanese prince, rescued from slavery by the British, and brought up in England to be a preacher. Quite probably the first black man to live in Scunthorpe, his marriage to a white woman brought film cameras to the town.

The Wrays of Glentworth: Radical Religion in Tudor and Stuart England

Lord Chief Justice Sir Christopher Wray’s memorial at Glentworth is one of the treasures of Lincolnshire, but he and his wife also founded a family that were supporters of radical religion across the country for fifty years. This is a story of rich and clever people, using their wealth to promote bright young men into key places – men like John Smyth, the founder of the Baptists – and their association with people like the Mayflower Pilgrims. Full of human interest, this is a fascinating tale of great wealth and great determination.

This is an unconventional approach to telling the story of Sherwood and the Dukeries. Rather than following it chronologically, we examine the tale through ten scandals – money, sex and political – that define what happened to Sherwood and the great houses that were built there.

The East Coast Main Line runs through our region from Peterborough to Doncaster on its way between London and Edinburgh. As the author of a definitive book on the topic, Adrian Gray can explain how accidents and disasters influenced the gradual improvement of safety down the years with some graphic illustrations of what went wrong including famous accidents at Doncaster and Grantham.

Cooper grew up in poverty in Gainsborough but through his own efforts became a school teacher, preacher and then journalist before turning to radical politics as a Chartist. After a spell in prison for causing a riot, he became a humanist lecturer until his sudden reconversion. From his house in Lincoln he continued his extraordinary travels across the nation and left an autobiography reckoned one of the best of the Victorian era. A church in Lincoln still bears his name.

Groups with a specific local interest can commission a tailor-made talk to fit their ‘region’. These talks give an overview of the most interesting human-interest stories ranging across the saints and missionaries who came from your area. The emphasis is always on the people and their lives.

The group Pilgrims and Prophets Christian Heritage can plan and deliver guided tours for your group to Christian sites across the region. Popular choices include the ‘Mayflower Pilgrims’ trail, Wesley and Epworth, and ‘Hidden Churches of West Lindsey’. Contact us to arrange a tour for your group.

Read about our work at: