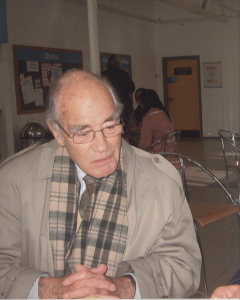 Michael Jackson, sadly passed away on 4th June 2017 at King’s Mill Hospital aged 89 years.The funeral service took place on Monday 19th June at Mansfield Crematorium at 1.45 p.m. By request there were family flowers only but if desired donations made payable to Parkinson’s Disease Society will be gratefully received.

He was a member of the Thoroton Society and past Chairman and honorary President of NOTTINGHAMSHIRE LOCAL HISTORY ASSOCIATION and  a founder member, and subsequently President, of the Worksop Archaelogical and Local Historical Society.

Michael was born in Brigg Lincs in 1927 and then lived in Gainsborough before moving to South Parade Worksop where his father managed  F G Welhams shop next to the Gaiety cinema in Bridge St. He attended Retford Grammar school, where he became editor of The Retfordian, and later qualified as a teacher after attending Borough Road college Isleworth. His teaching career saw him at Edwinstowe Junior school reaching the position of headmaster before retirement. He was also a Lay Preacher attached to  Mansfield Methodist church. Mike went on to publish several books mainly on the history of Worksop. He was working on his last book Worksop and Nottinghamshire Windsor Chairs during the final weeks of his life

During his life Michael made a large number of friends throughout Nottinghamshire and Lincolnshire and was a highly respected researcher.

He will be greatly missed