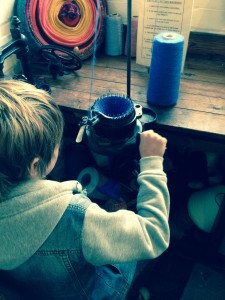 A circular knitting machine at the Framework Knitters Museum

Members of the public will be able to knit a poppy on the same type of hand-powered machine that was used to knit socks for soldiers during the Great War to honour Nottinghamshire’s fallen soldiers. This one-off opportunity, on Saturday 11th October, is free of charge, and is part of a wider knitting day being held at the Framework Knitters Museum, Ruddington, for BBC Radio Nottingham’s Big Poppy Knit campaign.

The Big Poppy Knit campaign, organised by BBC Radio Nottingham as part of the World War 1 centenary, has been created to commemorate the people who lost their lives during WW1. They are asking members of the public knit or crochet 11,000 poppies to mark each of the 11,000 Nottinghamshire men who fell during the war. The poppies will then be donated to the Royal British Legion to be sold as part of the Poppy Appeal.

The knitting day, which will run from 11 am to 4 pm, is open to all ages, and both knitters and non-knitters. The knitting machines that will be used to knit the material for the poppies, called Circular Knitting Machines, are really easy to use so can be used by children and those with no knitting ability. For those who can knit there will be space in the tea room to sit and create poppies, with a variety of patterns available. It will be free to take part in all activities. In addition to the poppy knitting all visitors will also be able to see the newly redeveloped museum for free that day.

During World War 1 a movement was launched to provide the men at the front line with knitting clothing, especially socks. The Country set about this task with great vigour, and many of the socks knitted would have been created on hand-turned knitting machines, such as the Circular Knitting Machines that are now at the Framework Knitters Museum.

“The Great War saw the country pull together and provide the troops with the knitted goods that they needed,” Paul Baker, Museum Manager, said. “Now it is our turn to knit, and help to raise as much money as we can to support our Armed Forces personnel. We hope as many people as possible will come to the event, both knitters and non-knitters, and support this great cause”.

For more information on the museum visit Framework Knitters Museum.