Trent to Trenches are running 4 Reginald Dolley Memorial lectures in honour of R.C.F. Dolley University College Nottingham’s first Professor of History who was killed near Arras in 1917.

The next one is on Saturday October 18th at 2:00 p.m in the Keighton Auditorium at the University of Nottingham. Admission is £4 in advance (tickets may be bought from the Theatre Royal box office) or £5 on the door but students, retirees and the unwaged will be admitted free of charge. 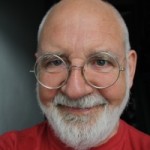 Julian Putkowski is Britain’s leading expert on First World War military courts martial. His lecture at The Keighton Auditorium, University of Nottingham, Outlaws and Un-Merry Men will draw attention to soldiers serving with the Sherwood Foresters who were executed during the First World War. Julian Putkowski was born in Suffolk.  After being awarded a first class degree in History at the University of Essex he became a college lecturer and developed an interest in C20th military discipline. His seminal work, Shot at Dawn (1989), written with Julian Sykes, generated a sixteen-year long campaign that secured posthumous pardons in 2006 for British soldiers executed during the First World War. His other books include: The Kinmel Park Camp Riots 1919 (1989), British Army Mutineers 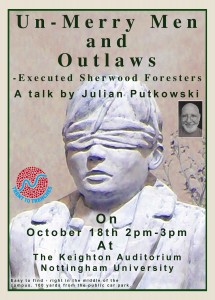 (1998), Unquiet Graves, Execution Sites of the First World War in Flanders (with Piet Chielens)(2000), Les Fusilles de King Crater (2002) and Murderous Tommies (with Mark Dunning) (2012). His research has also featured in a number of controversial TV dramas and documentaries, including: The Monocled Mutineer (BBC1, 1986), Going Home (BBC1,1987),  People’s Century (BBC, 1994), Shot at Dawn (BBC, 1993) and Get Collins (RTE 2007). He has also excelled as a broadcaster with a reputation for researching and presenting critically well-received radio documentaries. The latter include: It is with very great regret (BBC Radio 4, 1993),  A Night on the Town (BBC Radio 4, 2004), Preposterous Files (Loftus North/BBC Radio 4, 2007) and Interrogators without Pliers (Rockethouse/BBC Radio 4, 2012).