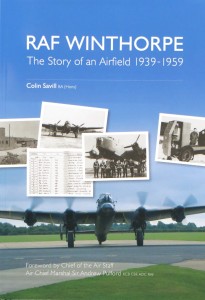 During World War Two Royal Air Force Winthorpe was a major RAF station providing vital training for aircrews destined for No.5 Group bomber squadrons operating in Lincolnshire. A new book is now available about the station in Nottinghamshire, which was located close to the Nottinghamshire/Lincolnshire county border.

After several years of detailed research, Colin Savill BA (Hons) has written a new history of RAF Winthorpe. The book has just been published by the Newark (Notts & Lincs) Air Museum, which is located on part of the former RAF Winthorpe airfield site.

The book is entitled RAF Winthorpe – The Story of an Airfield 1939 – 1959 and it is the story of RAF Winthorpe from its beginnings to its demise as an RAF station.

Copies of the book are now available to purchase from the Museum Shop and they cost £15.00 each. Anyone wishing to purchase a copy can visit the museum between 10am and 4pm daily and you do not need to pay a museum admission fee if you just wish to shop. Copies are also available by mail order – please check for rates; telephone 01636 707170.

The author – Colin Savill – was born in Newark, Notts and educated at the Magnus Grammar School. Following RAF service he worked in engineering for many years before becoming a mature student at, then, Bishop Grosseteste University College, Lincoln graduating in 2010 with a BA (Hons).

He joined Newark Air Museum in 2009 as a volunteer and became a trustee of the Museum in 2012. He is widowed with two daughters and several grandchildren; and lives in Tuxford.

A book signing event will take place in the Museum Shop on Saturday 15th November 2014, between 10am and 3pm when Colin will be on hand to sign copies of the book and to discuss aspects of his research.