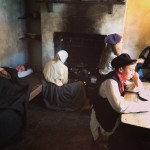 On Wednesday 15 October an event was held to thank students from Rushcliffe School for the part they played in a unique joint project by the Framework Knitters Museum, in Ruddington and the school. The project, funded by Museum Development East Midlands (EMDA), saw the students take an active role in a £100,000 redevelopment of the museum, having a direct impact on the both the developments to the site and exhibitions, and the creation of a new educational resource.

The first stage of the redevelopment, funded by the Heritage Lottery Fund, was launched at the end of July, and included the redevelopment of the historic site and the introduction of two brand new exhibitions. The second stage is the launch of the education programme, including an innovative interactive film, which will be formally launched next week. Throughout the creative process for each aspect of the redevelopment the students have been instrumental in providing feedback, and suggestions, to shape the finished product, and they even starred in the film.

Emma Jenkins, aged 16, a year 12 pupil at Rushcliffe Secondary School, worked on the film script and the museum promotional leaflet. She said “it was amazing to see things evolve as the project went on. I really enjoyed meeting with the script writer, as he really wanted to know what we thought so he could make the script better.”

It is not unusual for museums to consult with their community and audience when creating new exhibitions, or conducting a redevelopment, but where this project stands out is how involved the group of students were. At each stage of creation and production, as far as possible, they were given a chance to review what was going on and provide input, interacting with the museum and film professionals in a frank and honest way. They were also given the opportunity to meet with the museum’s marketing consultant to discuss how the redevelopment was going to be promoted.

Izzy Hale, aged 17, a year 13 pupil at Rushcliffe Secondary School, mainly worked on the script. She said “I learnt a lot from taking part in this project. I now know how important it is to consider other audiences in what you do, as I the film was aimed at people younger than me. I also understand how important it is to always put your opinions forward; it was great to feel that they were valid and heard.”

The event, held in the museum’s historic chapel, allowed the students and their parents to have an exclusive first viewing of the interactive film, and to view the redevelopments that have taken place around the museum. Each student was presented with certificate and gift token by the museum to thank them for their hard work during the project.

Paul Baker, museum manager, said “It has been a fantastic experience working with the students. They have all been incredibly professional and a pleasure to work with. I hope they are as proud of what we have achieved as we are. We are now keen to explore other ways in which the museum can support the school”

For more information about the museum visit Framework Knitters Museum. Bookings for the school and group education programme are open now, and the interactive film will be available to the public on selected dates that will be published on the museum website.